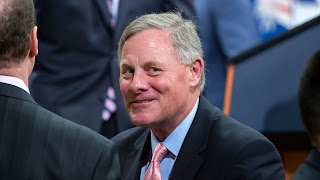 Appreciate Jeffrey Billman's IndyWeek Primer for pointing out an article in ProPublica about how Senator Burr sold his DC townhouse to a high-powered lobbyist for what appears to be an above-market price.
“Burr sold the small townhouse, in the Capitol Hill neighborhood, for what, by some estimates, was an above market price—$900,000—to a team led by lobbyist John Green. That is tens of thousands of dollars above some estimates of the property’s value by tax assessors, a real estate website and a local real estate agent. The sale was done off-market, without the home being listed for sale publicly.”

“The legality of this sale hinges on whether the home was purchased for fair market value. If it was purchased for more than that, it would be considered a gift. Gifts of significant value from lobbyists are generally banned by Senate ethics rules, and those that aren’t are typically required to be publicly disclosed. Neither Burr nor Green disclosed any such gifts. Gifts that are intended to influence official actions are illegal.”

“Burr, it seems, has not gotten the memo that 50 percent of North Carolinians want him to resign. He hasn’t even listened to Fox News darling Tucker Carlson, who said ‘there is no greater moral crime than betraying your country in a time of crisis’ and called for Burr to quit as well.”

Posted by J.W. Williamson at 4/15/2020 09:04:00 AM
Email ThisBlogThis!Share to TwitterShare to FacebookShare to Pinterest
Labels: Richard Burr

Dr. Williamson- I wish you'd get back to me at Martinstanley503@gmail.com about why you have not approved my comment which I also submitted to Charlotte Talks about why ecology cannot be discussed amid several crises. This is urgent for me because Charlotte Talks has censored that same comment as spam. Please read it and tell me if you think it is spam. It took several hours and intense concentration for me to compose it as I am intellectually rusty, only recently having lost my job as a skilled laborer. If there is anything I can do for you as compensation do not hesitate to ask. Red Hornet

Sorry. Didn't receive or see the comment you're referencing. Try again to send it.

Here it is:
Discussion on wfae 2 comments
Charlotte Talks Politics: Earth Day Begin With Bipartisanship. How Did The Climate Get So Polarized?
Red Hornet
Red Hornet 2 days ago
Why did CT remove my sincere 3 paragraph comment?
It was civil and carefully thought out.
You have proven all my points by your censorship.

Sorry. I am discovering that on Disqus today anything other than praise and thanks is spam.
So thanks, you're wonderful.


Red Hornet 2 days ago
Detected as spam Thanks, we'll work on getting this corrected.

The March 31st report by Laura Sullivan on Frontline "Plastic Wars" was dismaying in what was revealed about the possibility of any American household having input on the politics of ecology. Plastic recycling is a sham, and so is most every other environmental issue. It's really not a matter of Partisanship. Democracy was always procedural and superficial in the United States, and recently it is profoundly diminished. There is a wealthy tiny minority donor class that picks and disciplines candidates for high office, and determines who they can appoint of be advised by. Our two party system has now become a one party system because those who speculate and write legislation will not allow the issues that rule people's lives such as job quality, health care, education, climate crisis, even privacy and debt to be fully and openly discussed and addressed. If you heard Biden deride Sanders about Italy's Covide19 response (blaming shortcomings on progressive politics) you understand exactly what I mean. Biden is vulnerable to losing the election despite Trump's implosion because that is the agenda of the Financial Elite who own DC. And they would expect Biden's obedience should he take office. Ecological action is not a logjam but an enormous engineered dam.
You'd have a better chance convincing a confederate flag waving gun thug on the front steps of the Michigan Statehouse than the DNC, paid to ignore obvious threats.
We can't help but be alarmed, but we are powerless in this morass of multiple life and death issues.
And so I'm ashamed at the way this issue has been framed by Charlotte Talks. I'm also frustrated that I feel compelled to comment here and have no other way to exercize my citizen's obligation. The local newspaper is bankrupt not only economically, but morally (poor Observer in corporate austerity) and
the local government is overwhelmed in hubris and denial. Charlotte Talks can't see much besides the bank towers and babbles on about book club and hobby issues as dictated by guest availability from propaganda campaigns. I regret those observations but can't deny them. If we are smart we'll realize that if the Republican Convention is in the Spectrum Center August 24-27 it could well contribute to the inevitable surge of infection that is likely coming. And that is typical of responsibility abdication in this country. Screw said contract. Human ecology is on the line.

I hope I haven't strayed too far in establishing the context of environmental issues as they exist. My conclusion is that the only input remaining to any household is behavioral: shopping habits and recycling. Not only is plastics kaput (Frontline above), but the price of aluminum cans is down to about a quarter as we enter what is likely a Depression. Toilet paper is coming back on the shelves but choice is disrupted as well as the foodstuffs supply chain. So we might not be able to pick the most environmentally friendly process or packaging for the foreseeable future. At worst we might be entering farmer's fields to pick our own vegetables like 1990s Russians. Under NeoLiberalism we will not see government cheese. (commodities) So happy ecological talk is increasingly a luxury for most families, though I do expect us stalwarts will still bring our reusable bags if they are allowed (possible contamination).
A Depression is a blessing for the Environment, if we turn a blind eye to majority suffering, because less pollution and waste will be expelled. The wealthy who benefit most from the bailouts and interest free loans they themselves design will likely litter, trash, poison and discard more. Why should they care when they have crushed labor and no longer need us others except to intimidate and dispense violence upon complainers? If they want a toxic light bulb or nuclear plant, gougey drug prices, a mandatory but risky vaccine or several muscle cars how can we deny their class victory or their proven superiority. This downturn was on the agenda before Covid19 and the crude oil price debacle. The parasites were poised to squeeze the turnip. The environment doesn't concern cloud dwellers. If those two lancets had not arisen the Debt Bubble would still have been pierced. It is no accident that the executive branch accelerated dismantling regulations and privatizing the commons while we reeled in shock and precarity. They're casting out the dead weight and it is our well-being. I'm sure Mr. Profeta and Mr. Dykstra are well prepared to discuss the glorious legislative season which could have been if this were a normal year. But as of late we can't assume there will be an election, or any living waged jobs left for the 99%. Stop the frivolity, Charlotte Talks, and respect your formerly affluent and trend setting audience, if you have not already lost them to daily briefings. Or will you proceed planting pansies outside the death camp gates? I wonder.