Yesterday, March 31, 2020, Senate Majority Leader Mitch McConnell (R-Ky.) told radio host Hugh Hewitt that the impeachment of President Trump distracted the administration’s attention away from the coronavirus crisis. Plain English version: Trump screwed up because the Democrats were mean to him. 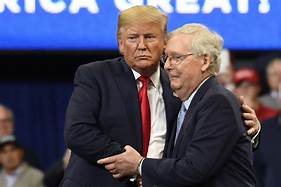 Let's see: The US Senate, led by McConnell, acquitted Trump on February 5. The first US coronavirus death was reported on February 29. Between the 5th and the 29th, what was Trump doing?

During the last rally on Feb. 28 (according to Snopes), Trump likened the Democrats' criticism of his administration's coronavirus response to their efforts to impeach him, saying "this is their new hoax." During the speech he also downplayed the severity of the outbreak, comparing it to the common flu. This now discarded Trump company line is still boilerplate for many on the right, including a handful of Trumpist Republican governors who refuse to take steps to protect their citizens. DeSantis in Florida. Tate Reeves in Mississippi. Et cetera.


The CDC issued its first warning about the virus on January 8th. In January alone -- while he might conceivably have been "distracted" by impeachment -- Trump held four rallies -- on Jan. 9 (Toledo), Jan. 14 (Milwaukee), Jan. 28 (Wildwood, NJ), and Jan. 30 (Des Moines).

Yeah, he was distracted all right

Posted by J.W. Williamson at 4/01/2020 09:26:00 AM
Email ThisBlogThis!Share to TwitterShare to FacebookShare to Pinterest
Labels: Donald Trump, Mitch McConnell