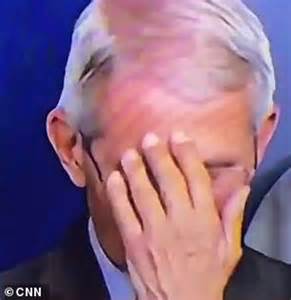 I refuse to watch Trump's daily "Ain't I Great?" TV appearances, masquerading as virus updates, but apparently, according to press reports, yesterday's was a doozy for the way Trump shut down Dr. Antony Fauci's attempt to answer a legitimate question. I'm thankful for Allyson Chiu and Meagan Flynn's blow-by-blow account:


President Trump spent a portion of Sunday’s press briefing yet again promoting an unproven treatment for the novel coronavirus, repeatedly asking, “What do we have to lose?”

So toward the end, a CNN reporter turned to Anthony S. Fauci, the government’s top infectious disease expert, for his opinion on the effectiveness of hydroxychloroquine with a sharper question: “What is the medical evidence?”

Standing at the microphone, Fauci opened his mouth — but before he could speak, the answer came out of Trump’s instead.

“Do you know how many times he’s answered that question?” Trump cut in. “Maybe 15.”

A tight smile stretched across Fauci’s face. His eyes, framed by a pair of wire-rimmed glasses, flicked quickly to Trump. He glanced back at the reporter, who was saying to the president, “The question is for the doctor. … He’s your medical expert, correct?”

Fauci’s smile, for just a moment, was all teeth now. Trump raised his finger sternly, telling the journalist, “You don’t have to ask the question,” and so Fauci didn’t answer it, and the news conference shuffled right along.

The unexpected interruption was an extraordinary moment even in this season of brash behavior exhibited by the president during his daily briefings. While Trump has been at odds with Fauci in the past, repeatedly clouding his administration’s public health messaging, the president has never shut down his top medical expert so abruptly and publicly before, intervening to keep him from answering. In other contexts, the president routinely calls on Fauci for medical questions.

But had he been permitted to speak, Fauci’s answer, which he’s given many times, probably would not have tempered Trump’s enthusiastic endorsement of the antimalarial drug as a potential treatment for covid-19. Trump, advised by his lawyer Rudolph W. Giuliani, among others, has touted the drug for weeks....


Posted by J.W. Williamson at 4/06/2020 09:28:00 AM
Email ThisBlogThis!Share to TwitterShare to FacebookShare to Pinterest
Labels: Anthony Fauci, Donald Trump

How much do you want to bet that trump and his family empire have substantial investment in the company that manufactures the drug?

Brushfire,
That was answered on NPR, I think it was, this morning. Trumps have a strong holding in Sanofi-Aventis, the maker of Plaquenil.