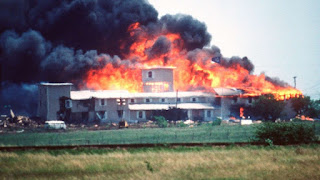 April 19, 1993 -- another day that will live in infamy. The day that some 76 followers of David Koresh, including 25 children, died in an assault by the FBI on the Koresh sect's compound near Waco, Texas.

Just watched the Paramount Network's mini-series "Waco" (which is streaming on Netflix), and over 20 years of assumptions and FBI falsehoods have been sufficiently swept away. The series was based on two books, "A Place Called Waco" by Branch Davidian survivor David Thibodeau, and "Stalling for Time: My Life as an FBI Hostage Negotiator," written by the FBI's Special Agent in Charge of Negotiations Gary Noesner, so the series has the advantage of inside information for dramatizing what went on inside the compound during the 51-day siege and also what went on between Agent Noesner, who was trying to coax Koresh to give up, and the FBI command structure whose superior fire power was a big hammer looking for every nail.

The FBI doesn't come off well, but even worse in this presentation were the macho cowboys in the ATF, who launched the whole tragedy by initially raiding the compound with guns blazing on February 28. The ATF was fighting bad publicity over the previous Ruby Ridge fiasco, when an ATF sniper killed Randy Weaver's wife, and they were itching for some grand show of efficient law enforcement to recoup their image. They'd even hired a press agent, according to the mini-series script, and without question they fired the first shots at Mount Carmel which led to the gun battle that killed four ATF agents and wounded a dozen more. That battle sealed the fate of Koresh and his followers. Law enforcement was motivated by vengeance as much as by upholding the law.

David Koresh was no saint -- he was an egotistical and probably unstable self-appointed prophet who had decided that only he could have sex with the women while all the other men following him had to remain celebate -- but was he a dangerous cult leader (emphasis on dangerous)? Probably not. He was obsessed with the end of days and the Book of Revelation and was amassing small arms at his compound, which drew the interest of the ATF, but the FBI appeared to be lying when it announced that Koresh was planning a mass suicide. They also obviously lied when they claimed that Koresh was abusing the children in the compound.

Hostage negotiator Noesner had reached a deal with Koresh, allowing him time to write a manifesto about the end of time. Koresh promised to give himself up when he had his manuscript finished, but the writing -- like all writing -- took longer than expected. The FBI honchos in charge grew increasingly frustrated, and forced the reassignment of Noesner, and with the one calming personality  gone that Koresh would talk to, the FBI unleashed hell. It appears that a combination of tear gas and flash grenades pumped into the building caused the devastating fire, although the FBI apparently maintains to this day that the fire was set by suicidal Branch Davidians.

Posted by J.W. Williamson at 4/22/2020 08:58:00 AM
Email ThisBlogThis!Share to TwitterShare to FacebookShare to Pinterest
Labels: movies