Let the US House Resignations Begin! 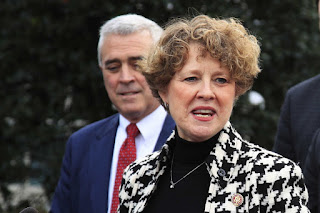 Even as the national GOP has been making much noise about recruiting women to run for Congress as Republicans, one of only 13 Republican women in the US Congress has just announced her decision not to run again.

The announcement by Rep. Susan Brooks, who has represented the 5th District of Indiana since her election in 2012, "stunned colleagues and party leaders," according to the WashPost.

"Though [Brooks] won reelection by 14 percentage points, Democrats figured they had a chance in a district north of Indianapolis that included the kind of wealthy suburbs Democrats did well in last cycle."

Bet there'll be additional stunning resignations before this year is out.

Posted by J.W. Williamson at 6/15/2019 07:37:00 AM
Email ThisBlogThis!Share to TwitterShare to FacebookShare to Pinterest
Labels: 2020 Blue Wave, Susan Brooks