Cal Cunningham Is Now in the Race for the US Senate 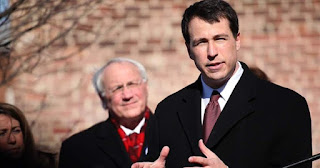 Cal Cunningham has been running for North Carolina lieutenant governor since last Thanksgiving. Today he announced that he's switching to run for the US Senate seat currently held by Thom Tillis.

Senator Chuck Schumer apparently had a hand in convincing him to jump into the Senate race, and with Democratic Senatorial Campaign Committee (DSCC) support, Cunningham is instantly the frontrunner among Democrats.

The best thing he could do is ignore the DSCC and run his own campaign. Best wishes in unseating Toad Tillis (n offense to toads intended).

Glad to hear Cal Cunningham is in and will be a strong candidate. Was hoping to hear from Janet Cowell by now as well. Any movement there?

Bench is looking better for 2022 as well

Durham peeps have not forgotten 751.