The Luckiest Democrat in the Nation 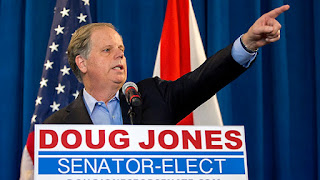 Alabama Senator Doug Jones must have a guardian angel. The improbable winner of Jeff Sessions' old seat in a 2017 special election has been staring down the barrel of his first reelection campaign in 2020, and along comes a repeat Republican offender in Roy Moore who says he intends to drag the Republican Party down again next year.

Four other Republicans have already declared for the race, none of them with the name recognition nor toxic history of Roy Moore. Some observers think hope that maybe Jeff Sessions will get in and run for his old seat, in which case Roy Moore would probably be crushed in the primary.

Twitterman, who supported Moore in 2017, has turned his back on him, calling him a loser who can't possibly win the Senate seat. That's got to hurt. But it has also fed Roy Moore's ego, to prove Trump wrong. What could be more tempting than proving all the Washington establishment wrong?