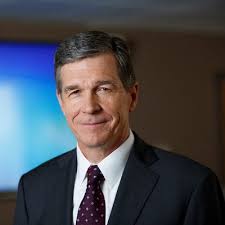 Governor Cooper announced yesterday that he will veto the budget passed by the Republicans in the General Assembly, and for the first time, with Republican super-majorities destroyed by last fall's elections, his veto may be upheld.

The main sticking point has been the expansion of Medicaid coverage in the state. Senate boss Phil Berger is very comfortable denying health care to at least a half-million citizens who otherwise could have it -- with 90% of its funding coming from the Feds -- and until Phil Berger gets hit by a bus, either literally or figuratively, the Republican state Senate will never go along with helping poor people get health care. Period.

So it's up to Roy Cooper to stand strong. And it's up to Democratic troops in the General Assembly to back him up.

There's more in the Republican budget to hate: Governor Cooper proposed giving every teacher in the state at least a 5 percent pay raise, with some getting up to 14.8 percent. The Republican budget would give an average 2 percent raise for teachers the first year and less than 2 percent the second year. (Take that, Miss McGillicuddy!)

School construction: Facing an $8 billion tab for school infrastructure, Governor Cooper wants a statewide bond committing the appropriate billions to fix outdated and crumbling infrastructure. House Speaker Tim Moore actually agreed with that. But Phil Berger once again has the biggest dick in Raleigh, and the resulting budget relies on a “pay-as-you-go” approach, pledging to spend roughly half of what's needed for school buildings in the next decade.

"Ask a teacher whether they’re willing to trust lawmakers’ promise of future action, particularly given the ... years, not months, of neglect from state leaders" (Billy Ball).

With crises erupting weekly over contaminated and dangerous drinking water supplies, the Republican budget again sticks its thumb in the eye of the Department of Environmental Quality (DEQ).  "DEQ had requested 37 new positions in the state environmental budget to address the crisis of perfluorinated compounds [PFAs] in drinking water supplies. The House tepidly responded with seven positions; the Senate, always financially brutal toward DEQ, eliminated the appropriation. The conference budget settled for just five additional full-time positions, but only two of them are devoted to PFAs sampling and analysis. The others are for permitting and administration" (Lisa Sorg).