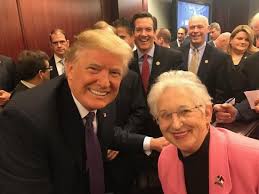 You should vote for the "Emergency Supplemental Appropriations for Humanitarian Assistance and Security at the Southern Border Act, 2019," which is before the US House right now, but we know you won't. You wouldn't vote for assistance to victims of Hurricane Florence, which devastated the lives of so many North Carolinians in 2018, so why would you feel any empathy for brown children on the southern border?

The brutalizing of children seeking asylum in the land of the free shocks the conscience. The cruelty of Trump administration policies appalls the heart. We know Donald Trump's first instinct is to inflict pain: "She's not my type." That appears to be your first instinct too. Do you want to be like two peas in a rancid pod with Donald Trump?

You built a nursery business in the North Carolina mountains using immigrant labor, so you certainly know how to use people. Do you also feel any sympathy? You like to brag about how poor you were growing up, which is, I guess, supposed to be an index to how much you feel for other poor people, but you don't appear to feel at all. Bragging about how poor you were doesn't open a window into fellow-feeling for others. Do you look at people sweating to make you richer and feel nothing but an uptick in your bank account? Even expendable workers need food and water, and their knowing you grew up poor doesn't help at all. It might just increase their pain.

The whole world is watching the inhumanity of the United States government toward powerless human beings. We are watching. You are part of the government. You have power. You have influence. You have lots of money. Why don't you do something other than hardening your heart?

Or are you a prisoner of your own history?

You might as well be speaking to a rock.