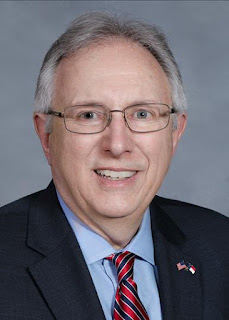 RALEIGH -- Monday, Gov. Roy Cooper signed into law a bipartisan bill that is a milestone for Rep. Ray Russell.

House Bill 646 improves the process for universities, government agencies, and other organizations to certify their photo IDs as Voter IDs. Rep. Russell was a primary sponsor of the bill. He, along with Rep. Zack Hawkins (D-Durham), became the first freshman Democrats to have a bill signed into law this session.

The bill becomes law amid a myriad of court challenges to sweeping voter ID changes instituted by the NC General Assembly last year.

“Even though court Constitutional challenges have and will be filed against North Carolina’s voter ID law, we must act to make sure every citizen, including college students, can vote without undue burden, regardless of the outcome of these court challenges,” Rep. Russell said.

“The voter ID law written last year placed insurmountable barriers for using university IDs as voter IDs,” he added. In March 2019, only 72 of over 850 schools and other institutions had their photo IDs approved as voter IDs for 2020 elections.

Rep. Russell and Rep. Hawkins sounded the alarm bell on problems with student IDs earlier in the session. In March 2019, Appalachian State was one of only 5 UNC System schools whose IDs were approved by the State Board of Elections for voting. House Bill 646 modifies the law so that additional IDs can be certified for use as a voter IDs and creates a new round of submissions to the State Board of Elections later this year.

Since beginning service at the NCGA in January, Rep. Russell hit the ground running with primary sponsorships to 16 different bills. For a full list of bills for which he has been primary sponsor, visit https://www.ncleg.gov/Members/IntroducedBills/H/753/2019/true.

I'm so proud of Ray...and proud to be one of his supporters!
Helen Clark