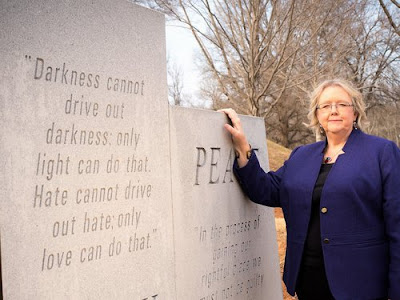 NC House member Larry Pittman (R-Dist. 83) is still fighting the Civil War on the losing side. He continuously insults Abraham Lincoln as ever bit as tyrannical as Adolph Hitler, and he thinks of homosexuals as less than full citizens. He's more than just a character. He's a legislator in the North Carolina General Assembly, God help us all!

Last year in his most recent reelection he got less than 53% of the vote against Democrat Gail Young, who polled 47.22%. That ain't bad. That actually suggests that Pittman is maybe hanging onto his seat by sheer voter inertia and force of habit.

I noticed only recently that Gail Young has declared her intention of challenging Pittman once again in 2020. She's a seasoned candidate by now, and she might bank on greater name recognition this time. Here's what I wrote about her very early in 2018:


Young is an advocate for government reform and accountability and the leader of a liberal advocacy group in Cabarrus County called Citizens in Action NC. She is also a retired career public servant, having worked for a long time for the Mecklenburg County government as a Division Director of the Land Use and Environmental Services Agency. “The politicians in Raleigh are not listening to the people they represent," Young says. "I have seen firsthand how frustrated people are after they met with their elected officials. Time and again I have heard that the elected officials don’t really listen and don’t care about the thoughts and priorities of their constituents. That must end.” Redistricting reform also played a large role in Young’s decision to run for the state House. She said she sees the legislature’s redistricting process as more an attempt to protect incumbents rather than an effort to protect the voice of the people of North Carolina.