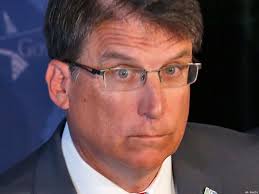 Axios got its hands on nearly 100 "internal Trump transition vetting documents" detailing facts/rumors/opinions about individuals who were being mentioned for Trump administration jobs. Former Governor Pat McCrory was on the list, apparently being vetted as a possible Secretary of Energy.

The dossier on McCrory was littered with "red flags" -- reasons he might be a disaster waiting to happen -- and as we know, he wasn't picked to be Secretary of Energy or anything else for that matter.

The dossier hit the high points of McCrory's biography -- his indebtedness to Duke Energy, his sore loser history, his "thin skin" -- and headlined his past criticism of Donald Trump. One section of the dossier, titled "General Controversy," has been completely redacted by Axios.

It's particularly interesting that the dossier views McCrory's claim of voter fraud in his loss to Governor Roy Cooper as a liability, while Donald Trump was alleging exactly the same thing to explain how Hillary Clinton got 3 million more votes than he did in November 2016.

Posted by J.W. Williamson at 6/25/2019 08:15:00 AM
Email ThisBlogThis!Share to TwitterShare to FacebookShare to Pinterest
Labels: Donald Trump, Pat McCrory