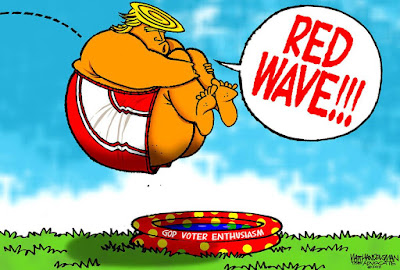 Twitterman decided to whistle (loudly) past that graveyard called November and improbably started touting a "Red Wave" coming this year. Jonathan Swan at Axios wrote yesterday that DJT's swaggering might actually be helping to depress Republican turnout. "Republican strategists want the base to panic so they'll show up to vote. But instead, Trump is breeding complacency."

Trump voters are glued to their unreality: "They watch Hannity ... and hear that a red wave is coming to save the House. They really believe it's going to be 2016 all over again."

Posted by J.W. Williamson at 8/20/2018 08:09:00 AM
Email ThisBlogThis!Share to TwitterShare to FacebookShare to Pinterest
Labels: 2018 Blue Wave, Donald Trump