Many people in Georgia -- Republicans and old-line Democrats (which are in many cases the same thing) -- don't think Stacey Abrams can ever, not in a million years, become governor of Georgia. She would not only be the first woman and the first black to win the governorship, she'd be the first black woman elected governor of any state. (She turned our head on WataugaWatch back in May.) 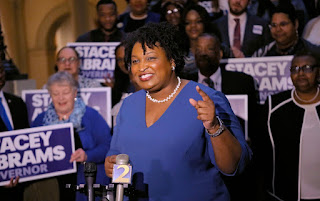 She was the Minority Leader in the Georgia House for six years, so naturally she made some enemies on her own side of the aisle because she was willing to negotiate with the majority. But don't underestimate her.

We like the glimpses of her we can get from the lengthy profile published in today's New York Times. What follows is from deep into that article:


Ms. Abrams was elected to the General Assembly in 2006, two years after Republicans had taken control of the Georgia House for the first time in more than a century. She was young, but not green. She had served as student president at Spelman College, Atlanta’s storied African-American women’s college, and kept her life ambitions, eventually including the goal of becoming president, listed in a spreadsheet. “The sheer boldness of my ambitions gnawed at me,” she recalled in her 2018 autobiography, “Minority Leader: How to Lead from the Outside and Make Real Change.”

Style-wise, she was more of a listener than a glad-hander, more policy wonk than enforcer. She was a careful, prepared speaker with a bookish quality, a wry sense of humor and a tendency toward efficiency.

“She engendered a sense of loyalty in a lot of people that way,” said Brian Thomas, who was a member of the House Democratic leadership at the time. “A lot of people just respected the fact that she was just a lot smarter than some of us, and able to use that intellect in ways that were really effective.” ...

Her debut on the political scene had effectively come in 1992, when she emerged as a leading voice among black students. Atlanta, like other American cities, was racked by protests and riots after police officers in Los Angeles were acquitted in the beating of Rodney King. Eventually she found herself at a televised town-hall meeting with Maynard Jackson, the city’s first black mayor. As the cameras rolled, Ms. Abrams recalled in her book, she “excoriated his record and scoffed at his leadership.”

Mr. Jackson later co-opted his eloquent critic, giving her a job in the city’s office of youth services. She went on to earn a law degree and a master’s in public policy, and at the age of 29, to serve as deputy city attorney....

She made her bid for minority leader in November 2010. The Democrats had just lost more House seats in the Tea Party wave election, and were watching bitterly as a number of their white lawmakers jumped ship to the Republicans.

The caucus, which had become majority black and held fewer than 70 of the 180 seats in the House, turned to a young backbencher. “I took the lead of a broken party,” Ms. Abrams wrote, “knowing that we would wander in the political wilderness for at least a decade.”

She had already established herself as one of the smartest members of the Legislature. Her background in tax law helped her analyze the deep structure of complex bills, landing her on the powerful Ways and Means Committee as a freshman. Even Republicans saw her talent: In 2011, State Representative Allen Peake called her “brilliant.”

“People who underestimate her risk complete embarrassment,” he told The Atlanta Journal-Constitution at the time.

Posted by J.W. Williamson at 8/20/2018 07:49:00 AM
Email ThisBlogThis!Share to TwitterShare to FacebookShare to Pinterest
Labels: Stacey Abrams