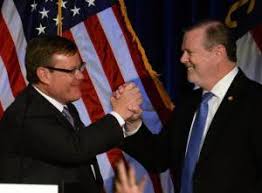 "Sizzling frustration." That's the hot turn of phrase that Sam Levine used to describe the attitude of the three federal judges who issued the 300+ page ruling about the NC General Assembly's continued attempts to keep the state's congressional districts gerrymandered using unconstitutional maps. Well, really it was one of the three, Federal Judge James Wynn, who wrote that decision and showed his mounting anger at our power-blind General Assembly.

Just look at how the Berger/Moore forces have resisted previous court findings: The Republicans passed new congressional district maps in 2011, which were in effect in 2012 and 2014 but were ruled an "unconstitutional racial gerrymander" in 2015. The maps the GA drew in response to that were the maps struck down this week on Monday. In addition to engineering (now) purely partisan gerrymandering to replace their purely racial gerrymandering, the GA has also mucked around in the state's judiciary,  imposing partisanship on those races and eliminating primaries, all in an effort to keep Republican judges on the bench and elect more of them. (And I haven't even gotten to the dismantling of checks and balances that those same Republicans have written into some constitutional amendments, and that's another whole set of lawsuits.)

The Federal judges saw all of that and were not amused. Which is why they're perfectly willing, given Republican behavior, to impose the harshest of remedies, to force the GA (or more likely, a special master) to draw new districts right now.

Berger/Moore, you brought this on yourselves.

Did you notice this: in responding to the 3-judge panel, Berger and Moore offered this helpful summary of the pickle they put themselves in: "If the 3-judge panel's decision stands, it will be the first time in the history of our country that a state’s Congressional delegation could not be seated.” (http://thehill.com/homenews/state-watch/404136-nc-republicans-warn-of-unmitigated-chaos-after-judges-strike-down-house)

And I suspect it isn't a good idea to taunt Federal judges who are already pissed off.