Intercepted Letter -- "Terrible Decisions That Limit the Rights of Landowners" 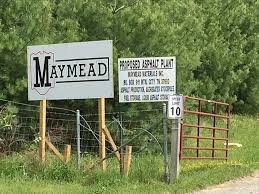 On August 7, Judge Phil Berger Jr. authored an order that denied standing to a couple from Watauga County in their appeal of a case that involves the proposed asphalt plant near their home on the Doc and Merle Watson Scenic Byway, Hwy 421 near Boone. When constructed, this would be the second Tennessee-based Maymead plant in this small county. In that unpublished order, the first sentence of the “Factual and Procedural Background” puts forth four blatant errors of fact. Whether intentional or just the work of a blundering clerk, there is no excuse for such sloppy work from the NC Court of Appeals. One local attorney commented -- “All politics aside, this is one of the worst written findings I have ever read.”

Those misstatements could well have persuaded the other members of the three-judge panel to decide that the substantial legal arguments of the case were not worth considering, and so they took the easy route of agreeing to dismiss standing, an increasingly common practice when the court wants to avoid examining the real legal issues. This decision is contrary to the court’s own previous rulings on standing.

After a three and one half year fight by Watauga County, the Town of Boone, and local citizens, this case has still yet to have a fair hearing. The local Board of Adjustments' ten-day hearing was mishandled, the Superior Court judge admitted in Court that he had gone to see a movie instead of reading the briefs, and Judge Berger characterized the solid evidence presented on the standing issue as “bald assertion.” The undeniable errors of fact in his order will remain unchallenged unless the NC Supreme Court agrees to accept a petition for discretionary review.

These events bring my faith in the system to a new low, and it appears that justice through a fair hearing is sometimes just a fantasy. This is not just a local matter relevant to a small western NC community. It is part of an increasing frequency of terrible standing decisions that limit the ability of neighboring landowners to intervene in zoning disputes so as to not bother big corporations and disturb profits. When citizens and communities seeking to protect their health, property, and way of life have to spend 3 ½ years and hundreds of thousands of dollars without ever receiving a fair hearing, something is terribly wrong.