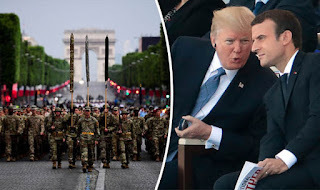 Twitterman witnessed first-hand the military pomp of a Bastille Day parade in the heart of Paris, and he immediately said he wanted one for himself in Washington. It looks like it's going to happen on Veteran's Day, Sunday, November 11, a few days after the fall election.

The military under Jim Mattis has caved, but the Secretary of Defense nixed the idea of tanks and other heavy equipment but will allow an aircraft flyover. White House budget director Mick Mulvaney estimated the parade would cost the taxpayers anywhere from $10 to $30 million.

We received this intercepted email from VoteVets.org, a large group of military veterans who have been very critical of the conduct of the Iraq and Afghanistan wars:


When we talk to members of Congress, they often ask why stopping this military parade is such a big deal to us. They wonder if people in their states and districts are really that fired up about this issue.

We tell them the answer is YES. Yes we are. Because this parade is not about honoring our military — it’s about using our military to honor Trump, a man who dishonors America and puts our country at risk.

We recently learned about the personnel and financial cost of the parade, and it’s as bad as you’d imagine:

This parade would be a national embarrassment all conjured up to serve a weak president’s frail self-image. To use some of our nation’s best and brightest for the task… it’s a disgrace.

So a few days after the November 6th elections, huh? Trump's ego will no doubt need a little inflating by then, but do we always have to pay for it?

Posted by J.W. Williamson at 8/12/2018 07:54:00 AM
Email ThisBlogThis!Share to TwitterShare to FacebookShare to Pinterest
Labels: Donald Trump