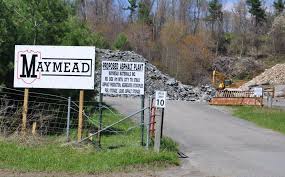 Yesterday the NC Court of Appeals ruled that the Henion family has no standing to contest the Maymead asphalt plant on the Doc and Merle Watson Scenic Byway. The Henions live virtually in the shadow of the plant.

A few things to know about the court's ruling:

1. The decision was written by Phil Berger Junior, the son of the most powerful Republican in the state who literally rigged the ballot in 2016 to get Junior elected to the Court of Appeals.

2. The decision was not published by the Court of Appeals, meaning it has no value as precedent. Unpublished, it is also not readily available to the public. Why, it's almost as though the Court was trying to hide it.

3. The Henions' only remaining option is to petition the state Supreme Court for discretionary review. At least that way someone will see the crappiest piece of legal writing that ever went down.

4. By focusing entirely on the standing of the plaintiffs to sue, Berger's ruling conveniently ignores the issues raised and skirts the merits of the case. He took the easy way out to not bother big business and corporate profits.

5. The ruling makes errors of fact, stating that "the Hamptons" controlled Maymead, presumably through ownership. They didn't and don't.

6. Phil Berger Jr. has been accused (July of this year) of campaign finance fraud in his 2016 campaign finance filings with the State Board of Elections. According to the complaint, there were three “suspicious” donations to Berger's campaign for his judgeship that raise questions about whether the named donors were being used as conduits for “mystery money” from other sources who did not want to be identified publicly. That, among other irregularities, omissions, and obfuscations.