1. Chris Anglin won a temporary restraining order yesterday at 4 p.m. The State Board of Elections is enjoined from printing any ballots until the merits of Anglin's suit can be decided. A hearing on the constitutionality of the General Assembly's hastily written new law depriving Anglin of party identification on the November ballot has been set for next Monday in Wake Superior Court.

Absentee voting by mail begins on Sept. 7, which means the State BOE would begin the process of printing ballots now, and had intended to, before Messrs. Berger and Moore decided to get too cute by half in trying to clean up their own previous meddling misfire. 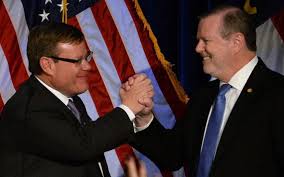 Incidentally, Anglin is not the only judge candidate affected by the Berger/Moore rug-yanking: According to Will Doran, Anglin "was joined in his case by Rebecca Edwards, who is seeking election as a district court judge in Wake County. Edwards switched her registration to the Democratic Party shortly before filing for that race. She argued her case jointly with Anglin on Monday."

“Retroactive legislation violates due process,” said [Edwards's] lawyer, Narendra Ghosh. He added that “the very integrity of an election” is threatened if there aren’t clear rules that voters and candidates alike can rely on.

Ghosh said he agreed with [Berger/Moore's lawyer Martin] Warf’s argument that there is no inherent right to run for office, or to demand how he or she wants to be labeled on the ballot. But, he said, “The difference is ... you can’t just retroactively take away that label in a discriminatory fashion.”

That's always been the issue (and if there's an added comic benefit in seeing the Republicans caught in their own web, then maybe there is a God).

2. The NAACP/Clean Air Carolina suit
These two groups have also asked for a temporary restraining order to keep the NCSBE from printing any ballots until their complaint can be heard against the constitutionality of four of the six constitutional amendments proposed for the November ballot.

The four amendments: the one requiring voters to present photo ID, the one capping the state income tax rate at 7 percent, the one changing the way judicial vacancies are filled to limit the governor’s role, and the other one taking away the governor’s power to appoint members to boards and commissions and give that power to the legislature.

3. Governor Cooper's suit
Will Doran, who had apparently seen draft language of this suit, reported on Saturday that Cooper would be filing a suit over two of the same amendments targeted by # 2 above, the ones taking away the governor’s power to appoint judges, regulators, board members, and literally thousands of other state officials, and transfer that power to the legislature.

The actual language of just one of those two amendments (which Berger/Moore are desperately trying to hide from the voting public) reads like this:

“Constitutional amendment to establish a bipartisan Board of Ethics and Elections to administer ethics and election laws, to clarify the appointment authority of the Legislative and the Judicial Branches and to prohibit legislators from serving on boards and commissions exercising executive or judicial authority .... The legislative powers of the State government shall control the powers, duties, responsibilities, appointments, and terms of office of any board or commission prescribed by general law.”

Former Republican governors Jim Martin and Pat McCrory and McCrory's general counsel Bob Stephens have all denounced this amendment as an upending of the very principle of the separation of powers and the checks and balances inherent in democratic government. Bob Stephens published an op-ed to that effect in the Charlotte Observer.

UPDATE
It certainly does appear that Governor Cooper is also in Wake Superior Court this morning.

CLARIFICATION
Judge Ridgeway was first hearing Governor Coopers petition (with arguments against) and is about to hear the NAACP/Clean Air Carolina petition for a TRO.

Hard to keep up at this distance.

FURTHER UPDATE
Judge Ridgeway punted the question of the constitutionality of the four amendments and their presence on the November ballot to a three-judge panel, taking the petition for a TRO under advisement. (SBOE is already enjoined from printing any ballots by the TRO in the Anglin case, so perhaps he didn't want to pile on today.)