Eight Ways Trump Is the Smartest in the Land 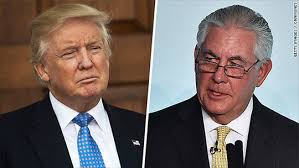 So this is the ant farm we live in now: Trump wants to stack his IQ up against his Secretary of State's. He hints broadly that he knows exactly how that contest would come out.

Trump is no Socrates. (And for the record, Tillerson did not call Trump "a moron." He called him "a fucking moron."

Smart people who think they're smarter than everybody else create problems for themselves (might call them "self-inflicted wounds"). In the interest of understanding our head of state, seen through the gauzy screen of "high IQ" that he prefers, we offer Eight Ways Trump Is a Smart Person:

1. Smart people are overconfident, and they let praise go to their heads, giving them an inflated sense of their own infallibility. It's dangerous to always expect you'll win at everything.

2. Smart people push other people too hard. They set the bar too high, and when their "underlings" take too long or don’t get things quite right, well ... expect a storm. Smart alecks push even harder, and because of their overconfidence (see no. 1 above), they beat up other people emotionally as unworthy and simply lesser human beings.

3. Smart people always need to be right. Being right, in fact, becomes a part of their identity, so any admission of wrongness or error endangers the overconfidence (see no. 1 above).

4. Smart people lack "emotional intelligence." Winning is all that matters (see nos. 2 and 3 above). People's "feelings" and "emotions" (just weaknesses to be ignored) are irrelevant, and in fact emotional attachments (love, empathy, fellow-feeling) are just hindrances to always winning. 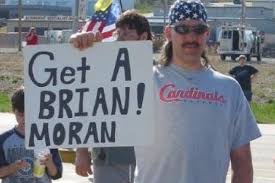 5. Smart people give up when they fail. Because failure is unthinkable, because winning is the only thing, when failure inevitably comes, Mr. Wise Guy is bludgeoned by reality and thinks it's the end of the world.

6. Smart people fail to develop grit. "When smart people can’t complete something without a tremendous amount of effort, they tend to feel frustrated and embarrassed. This leads them to make the false assumption that if they can’t do something easily, there’s something wrong with them. As a result, smart people tend to move on to something else that affirms their sense of worth."

8. Smart people have a hard time accepting feedback or constructive criticism. They tend to under-value the opinions of others, or feel contempt for them. So they also tend to think that any other opinions are not worthy of attention. Which often leads to toxic relationships (see no. 2 above).

Posted by J.W. Williamson at 10/10/2017 09:36:00 AM
Email ThisBlogThis!Share to TwitterShare to FacebookShare to Pinterest
Labels: Donald Trump, Rex Tillerson

Smart enough to beat all of you and Hillary.

Anonymous - There is a difference between smart and cunning. Trump is cunning, " having or showing skill in achieving one's ends by deceit or evasion." With the aid of Russian cyber psy-ops, and the craven collusion of the absolutely amoral Republican propaganda machine, Trump was able to con a significant (not majority) number of Americans. We all will pay the price unfortunately. Hoping our children and grandchildren survive.

Russia? seriously? you're still on that track? I thought Russians hiding under the bed went out of favor in the 50's.

Trump was smart enough to know it's the Electoral College that elects Presidents, not the popular vote.

Yeah, the Republican establishment would love for us to forget about the Russian collusion to feed anti-Hillary propaganda to the ignorant masses. They are just praying you will ignore all the evidence collected by the 4 main intelligence agencies. intelligence report

Why do you suppose Putin went to so much trouble to put Trump in the oval office?