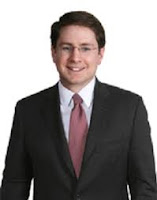 Paul Foley was the Winston-Salem lawyer who -- while also a newly appointed member of the state Board of Elections (BOE) -- colluded in 2013 with Stacy C. "Four" Eggers in trying to shut down all polling on the Appalachian State University campus. Foley was later ousted from the SBOE by Governor McCrory over another conflict of interest problem.

So what's Paul Foley up to these days?

Senate leader Phil Berger had slipped Foley's name into Senate Bill 694, which is being considered this week in a special session in Raleigh. According to language that Berger inserted, Foley was to serve out the unexpired term of Dan Barrett on the State Human Resources Commission, serving until June 30, 2021.

The Winston-Salem Journal began asking questions, and presto! change-o! Phil Berger's office suddenly discovered that “that name was included by mistake and will be removed when the bill is heard in committee later this afternoon.”