In 1970, I guess you could say I hated President Richard Nixon's guts. He had been elected in 1968 in the first presidential election I was old enough to vote in. My guy lost, and I was bitter and disappointed. (Actually, Hubert Humphrey was only "my guy" by default. I had dropped classes at the University of Utah during the spring of 1968 to volunteer full-time for Eugene McCarthy. He was my guy, but he couldn't get there either.)

Nixon was just plain evil to a whole generation of college students, especially maybe some college males whose collective ass was in a crack over the draft and the war in Vietnam. Nixon had campaigned on "a secret plan" to end the war, but war-ending under Nixon looked a whole lot like war expansion. At 9 pm on April 29, 1970, President Nixon went on all three networks (yes, children, the world was much narrower back then) and announced that he was invading Cambodia.

College campuses erupted in a geyser of rage. Demonstrations broke out on many a quad; some 500 colleges simply shut down altogether. Among many other serious consequences, four died from National Guard gunfire at Kent State University. The University of Utah was calmer. Someone set fire to an old wooden-frame structure in the middle of campus, but it had been abandoned and scheduled for demolition anyway.

Nixon's popularity went up. Campus ruction in all its extremes in fact guaranteed Nixon's reelection in 1972. We had fired the first gun in the "culture wars," with all its generational conflict and "out-there" rebellion against social norms. We started the war, and we immediately began to lose every skirmish. Our bad press was their good fortune. But families also split apart. Kids ran off to anywhere and shortened their lives. No restraints, no walls, no regrets. That's a lie. There were regrets aplenty. It was bad.

In a noisy time, I had no ears for Nixon.

Reading Evan Thomas
My ears have been opened by Evan Thomas's Being Nixon: A Man Divided, published a couple of years ago. I just now picked it up, and I repent.

Nixon could be -- often was -- awkward in public, socially retarded, incapable of displaying love or empathy, and inappropriately tone-deaf. But it wasn't because of any inner sociopath. Nixon empathized. He actually cared more about black life in America and had an impulse to help black people perhaps superior to that of the Kennedys.

Shortly after the Cambodian Incursion TV speech, Nixon off-handedly called college protesters "bums" --Nixon was known for lashing out when he felt criticized -- and the bums obliged him by calling for a big protest -- the biggest ever -- in Washington, D.C., outside the White House for Saturday, May 9th. "The March on Washington."

The Republicans made a moat of big city buses, parked nose-to-tail so no mother's son could get between them, all around the acres of White House grounds. Troops from the Third Army bivouacked in the Executive Office Building. The city locked down, bracing for the worst, while thousands of hippies and wannabes began gathering at the Lincoln Memorial on the Friday eve of the big march.

In the White House, Nixon was in an agony. On the one hand, he was belligerent and shadow-boxing any foe. On the other, he was also agonizing over the Cambodian decision and his hurt from knowing he was the bogieman of an entire generation. He may have had a Scotch. One drink could make Nixon loopy (a word Haldeman used to describe him in his diary on at least one occasion), and he had not been sleeping at all. What he did next can seem crazy but also courageous and empathetic.

Unable to sleep, Nixon ordered a car shortly before dawn on May 9 and had himself driven to the Lincoln Memorial, where he got out, climbed the stairs, and began to engage with the protestors camping there overnight. "I know that probably most of you think I'm an SOB," he said to some wide-eyed and sleep-deprived guys with long hair. "But I want you to know that I understand just how you feel."

I think he did know something about how they felt ... because of his own childhood and family, the knocks he'd taken, the losses he'd suffered. But he didn't win the young guys over. They thought he was crazy and -- worse-- irrelevant. Rebuffed at the Memorial, Nixon also immediately took a beating in much of the press, when it got wind of his early-morning expedition: "a bizarre pilgrimage," "a trip to futility," "rappin' with the kids" ... was he drunk?

I see humanity in him that I totally missed at the time. He did not toss paper towels at disaster victims because he couldn't care less what happened to them. He drove down where they were and got out of his car and shed his bubble to reach out and try to talk. The fact he didn't succeed is irrelevant to me.

For the Record: Nixon's Accomplishments
He signed the extension of the Voting Rights Act.

He signed the Clean Air Act.

He signed the Water Pollution Control Act and legislation establishing the Environmental Protection Agency and the Occupational Safety and Health Administration (OSHA).

He established an Office of Consumer Affairs in the White House and was more aggressive about consumer protections than some Democratic presidents.

He expanded the National Park system.

He signed the legislation that created Amtrak, the Rail Passenger Service Act. 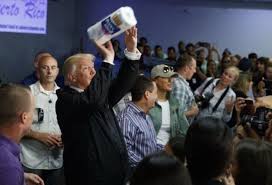 He signed the bill giving 18-year-olds the vote.

He signed the bill that eliminated the Selective Service.

He began the federal war on cancer.

He expanded Social Security and Medicare faster than inflation.

If he hadn't been driven from office, he might have gotten universal health care as well. He had proposed a massive health care reform in 1974, but Sen. Edward Kennedy and the Democrats running Congress blocked him.

Posted by J.W. Williamson at 10/08/2017 11:11:00 AM
Email ThisBlogThis!Share to TwitterShare to FacebookShare to Pinterest
Labels: Donald Trump, Richard Nixon

I can't help thinking that the backlash against the youth rebellion in the late 60s was because the generational rebellion had united with the civil rights movement, and the forebears of all those Obama haters of recent years were pretty motivated in the late 60s to hate the hippies because they were also advancing black causes.

Personally, I can't think of Nixon with any charity, but I can appreciate your viewpoint.

So is that bio worth taking time to read (when so many other worthy books are in a pile at my house already)? As for political reading I have to admit it's all I can do to get through an article in Atlantic or even a NY Times op-ed piece...

Found it not only very readable -- almost couldn't put it down -- but also a perspective on Nixon's personality that was really interesting and often persuasive. Nixon's a much more complicated figure in my mind than he was before. Which I take as a good thing.