This action will cause insurers to leave some Obamacare markets, causing higher premiums, among other consequences.

In a separate action on Wednesday (the signing of the Executive Order pictured to the left), Trump asked the Labor Department to loosen rules that permit small companies to band together to form associations and buy the kind of coverage available to larger businesses (that is, insurance governed by federal employment law, not state insurance regulations, which means cheap prices, poorer coverage, and denied claims).

What Trump did last night -- ending subsidy payments -- he could do because of a flaw in the language of one section of the Affordable Care Act. The ACA created the subsidies but did not clearly fund them, leaving subsidies in a weird legal pickle. Insurers are still required to offer discounts to customers who qualify. And the insurance companies may sue the administration to recoup the funds. But insurance providers will lose money in the short term, and in the long term, they'll raise their premiums to make up for the losses. That could also actually hurt higher-income customers who pay full price. 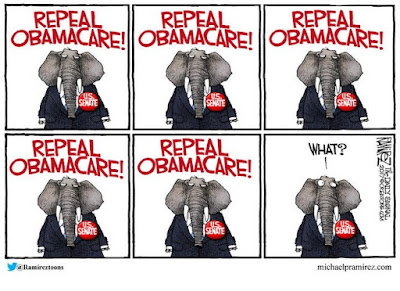 In theory, precipitously ending the subsidy payments could lead to "catastrophic market failures."

Oh whatever. It's a knee-capping of at least a fair number of Trump voters who have been turned into applauding bots when Trump attacks "Obamacare." Those voters need health insurance too, and Trump is not their friend. He is a termite, chewing at the struts that prop them up.

No law has been repealed.

But it's being pecked at by a Peckerhead who'll hurt the very people he's somehow convinced that he's some kind of genius who actually cares about them.
Posted by J.W. Williamson at 10/13/2017 01:03:00 PM
Email ThisBlogThis!Share to TwitterShare to FacebookShare to Pinterest
Labels: Donald Trump, health care

You passed a bad law.

This is what happens when you do that.

So you are saying that people may have to start paying the full costs of their own insurance and that you won't be taking my earnings and spending them on yourself?

You have said in the past that you don't mind your tax dollars funding other peoples insurance. Now here's your chance! You can just find a few parasites and fund them directly - just offer to pay their insurance premiums.

Spoken like a true Trumpist! Let the scum die!

So, did you find some? You won't have to look very hard...they usually are posting their
"We hate Trump" rants here on Watauga Watch.
So many Democrats are generous...as long as it's other people's money they are giving away.

Your money will pay for this anyway.... Through skyrocketing premiums for everyone.

NOT everyone. The Parasites will still be subsidized by the insurance companies.

Premiums will rise for those making over $100K.

those who have insurance through their employer won't notice anything.

Many insurance companies will opt out of Obamacare.

Hopefully there will be a revolt and people will force Congress to address Obamacare by repealing it.

You lefties pay for the program instead of the rest of us.

You all passed this obscene law, now it's collapsing.

So if you want to keep it YOU pay for it.

Say there's 80 million democrats, and the subsidies next year were going to be 10 BILLION according to NPR.

Sounds like a good deal to me. You all can help those you say you want to help, you keep your precious Obamacare, and you can clam all the moral superiority you want to help you sleep at night.

I really don't mind spending money to help other people. Well, as long as it's OTHER people's money I mean.

Thinking of the anonymous commenters who turn their back on their fellow citizens, I still would not wish to reduce my tax payments so as not to pay for the national defense, police and fire protection, or the safety of the food they trust. As much as I might derive pleasure in their suffering, it is not what a responsible citizen does.

We lefties are much more fiscally conservative than Republicans. See we understand that investing in health, education, and the general welfare are much less costly in the long run, as opposed to paying for increased prisons, massive epidemics of disease, decreased productivity, increased bankruptcy, and other consequences of the social darwinism Republicans seem to favor. We also understand the idea of the social contract, that benefiting from a stable social structure requires us ethically and morally to contribute to that social structure. We understand that a high inequality index leads to social instability, and ultimately violence and revolution. We actually believe that a primary function of the Federal Government is to promote the general welfare. How radical is that?

Social contract is a myth created by marxist do gooders to steal from others.

I like to hang out with mentally healthy and happy people, so no.

Anon 5:12 - Have you ever been tested for sociopathic traits? Lack of empathy is a prime indicator.