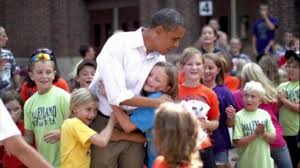 President Obama left the White House last January with an approval rating of 59%. We can argue all day about what caused that, but I think it was because he was a good man. He was a good man during a hard time, and people honored his character (even though I had my moments of rage at him).

He had and has good character. Scandal knows him not. He has a sense of humor and patience like Griselda. He possesses unmistakable respect for other people, some of whom exhibited nothing but hatred and contempt toward him. (The man Obama graciously ushered into the White House last January 20th had rather recently led a "birther" movement which had questioned Obama's legitimacy to even be in this country, let alone sitting on the throne of the nation. That man had much more recently conceded that birtherism has no basis in fact after all, yet he could not bring himself to apologize to the de-legitimized man who was now extending his hand in comradeship.)

Obama had character. He wasn't one.

He could speak in whole sentences, which built themselves into paragraphs, which often led upward in sense and substance toward what was possible, not backward to petty grievances and grudges. His respect for other people would not allow him to pitch a public fit over his political enemies, who were everywhere and powerful. (Robert Draper found out that some 15 Republican Congressional leaders -- including Bob Corker -- met in the Capitol on the night of Obama's first inauguration and discussed how they would oppose everything Obama wanted. Obama certainly knew or would soon understand their intransigence, yet he did not carpet-bomb them with tweets.)

Opposed in all things, Obama continued to seek compromise. Trying to get health insurance reformed in this country, he sought bi-partisanship for way too long, which only complicated and handicapped the product. (The source of a large part of my personal rage.)

Some times accommodation is not really prudent. Curiously, that goes for Trump too, who'll sign any goddamn thing Congress wants to pass -- whether its pushed through by the Republicans or the Democrats or a tribe of elves -- and he doesn't really care what happens next. That's accommodation that shows a lack of character.