Must Be Raining at the Golf Course

Fourth weekend in a row, Trump's at his Virginia resort, but golf's apparently out today -- damn you, National Weather Service! -- so he's inside nursing his grievances and maybe a nice cuppa Ovaltine laced with gall. At least the taxpayers are saving money on rented golf carts for his entourage.

So what's he tweeting? This right here, for just one, which actually contains an uncharacteristic confession on his part:

While not at all presidential I must point out that the Sloppy Michael Moore Show on Broadway was a TOTAL BOMB and was forced to close. Sad!
— Donald J. Trump (@realDonaldTrump) October 28, 2017

Where does he get this stuff? Here's the truth (also the motive): Michael Moore, ("Roger and Me," "Bowling for Columbine," "Fahenheit 9/11," etc.), has stepped forward as a sharp Trump critic ("Michael Moore in Trumpland"). His one-man Broadway play, “The Terms of My Surrender,” which bashes Trump good 'n' plenty, was contracted to run as a 12-week limited engagement, and it completed its run, grossing $4.2 million, making it "the highest-grossing non-musical" among plays that opened in the summer, according to Playbill.

Not exactly "a bomb" of any kind, including "a TOTAL BOMB."

Where does he get this shit? Does he just make it up because the universe owes him the revenge, or does he hear something vague from someone that gets BLOWN UP in that "very good brain, a very smart brain" of his into a fantasy scenario in which he's always the winner? 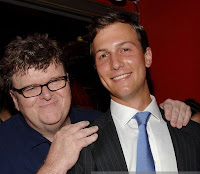 He just grabs some random topic and shits on it (or him, or her). "Sloppy Michael Moore." That's the red meat the fans adore. The juicy red meat. And a needed diversion for Trump himself, probably. He's got to be in suppressed volcano mode today, because of this certain other really bad breaking news: Someone's been indicted by Mueller and will be taken into custody soon.

About 10 a.m. this morning Trump began to pick the scab of Russia and hilariously try to turn the whole collusion thing on Hillary. It's an amazing performance, with a recitation of Hillary's Greatest Hits -- the "Uranium to Russia deal," the 33,000 missing emails, "the Comey fix." He even claims he's never seen such "ANGER & UNITY" among Republicans who are universally demanding a Congressional investigation into the supposed $12 million that Hillary supposedly paid for "the FAKE dossier" (not making any of this up! He actually mentions the Steele dossier).

MEMO to DJT: It's not who paid ever how much for the dossier. It's whether the dossier is true.

I see why head-shrinks might detect a mental tendency in the putative Leader of the Western World, let alone the Man Who Will Make America Great Again, that might be concerning on alternate days, or when the golf is rained out.