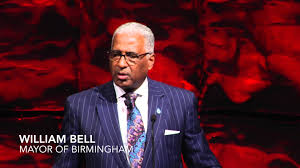 William Bell, Mayor of Birmingham since 2010 and heavy favorite to win reelection, was defeated last Tuesday by progressive insurgent challenger Randall Woodfin, a 36-year-old former board of education president endorsed by Bernie Sanders.

In the August 22 primary, Woodfin had led the 12-candidate field with 40.84 percent of the vote. Incumbent Mayor Bell ran second with 36.55 percent. Pundits thought the people would once again rally around Mayor Bell. They didn't.

Bell, a lawyer, had served on both the Birmingham city council and the Jefferson County Commission before being elected mayor in 2009 in a special election to replace former Mayor Larry Langford who was convicted of corruption. Bell was re-elected twice more in 2011 and 2013. Bell touted his economic development policies, but challenger Woodfin brought youth and his own reputation for fighting corruption.

Woodfin defeated Bell with 58 percent of the vote on Tuesday.

The Bernie Sanders org, Our Revolution, was on the ground in Birmingham for Woodfin. “We sent nearly 8,000 get-out-the-vote text messages to supporters and sent over 70 volunteers to his campaign” ahead of the August primary, said Diane May, communications director for Our Revolution Then for the runoff last Tuesday and according to The Intercept, Our Revolution made over 1,000 calls and sent 11,000 text messages to voters. Sanders himself phoned in robocalls for Woodfin. The Woodfin’s director of field operations was an alum of Sanders’s 2016 campaign.

I'm a little vague on what propelled Woodfin to the win, but here's the smoke: “Randall Woodfin ran on the idea that the people of Birmingham have a right to demand a government that truly works for all its people, and that a city can provide opportunity and lift up those who’ve been left behind,” Joe Dinkin, national spokesperson for the [Working Families Party] said in a statement. “Woodfin is part of a wave of local candidates around the nation who are running on bold, transformative, progressive visions and winning.”

"He seeks to make community college free for students who graduate from Birmingham’s high schools. He wants to expand pre-K, and invest in public transit and job training .... He is also looking to boost the city’s police force; Birmingham has the seventh-highest homicide rate of cities of over 100,000 people. He had his own personal connection to the city’s sky-high crime: His nephew was shot and killed during the course of the campaign. The boy’s father, Woodfin’s older brother, was killed in a shooting five years before that."

One city is not a trend, it's an anomaly.