One Less Adult in the Room

I'm telling my fellow Democrats that we're losing a good man from the US Senate. Bob Corker is a good man (and not just because he uncorked himself to Jonathan Martin yesterday, who promptly published those comments about Trump this morning in the NYTimes). Corker was the mayor of a large Southern town -- Chattanooga -- which made him a moderate by many measures. When he first ran for the Senate, his Republican primary opponents claimed he was a "leftist." So there's that.

Oh he's voted many times with the Republican monolith on issues anathema to me, but now that the chips are coming down on an incompetent and unqualified president who daily threatens us with nuclear war (among many other things), Corker has been standing up like a statesman.

I have not wanted to like him. I held it against Bob Corker, the way he beat Harold Ford in 2006 for the Tennessee senate seat being vacated by Sen. Bill Frist. Corker allowed the Republican National Committee to run a 30-second ad attacking Ford with rank racism. A blond actress, simpering and giggling in a lewd way, says on camera that she met Harold Ford, who's African American, at a Playboy party (and it's clear that she sure did like that brown sugar!). "Harold, call me!" she says at the close, making a telephone with her fingers.

Gawd, that was an awful hit piece. It intended to awaken racist fantasies and fears, and it did. Immediately after the ad began to air, Corker inched ahead in the polls and ended up beating Ford by a mere three points. 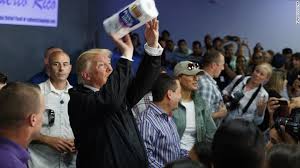 Some men grow in office, especially when given great power. Corker is a very powerful committee chair -- Foreign Relations. And he's worried about how the US is suddenly wobbling like a drunk billionaire all over the place. Meanwhile, other men elected to great power toss paper towels to peons, just to remind them that they're peons.

“He concerns me,” Corker told Jonathan Martin about Trump. “He would have to concern anyone who cares about our nation .... I know for a fact that every single day at the White House, it’s a situation of trying to contain him .... I know he has hurt, in several instances, he’s hurt us as it relates to negotiations that were underway by tweeting things out .... Look, except for a few people, the vast majority of our [Republican Senate] caucus understands what we’re dealing with here. Of course they understand the volatility that we’re dealing with and the tremendous amount of work that it takes by people around him to keep him in the middle of the road.”

That's a red alert, coming from an informed and powerful man who cares about this nation and its future and who's willing to rise above partisanship to warn the unwary.

If Corker's evaluation of Trump doesn't chill your spine, then you're likely a Trumpeter who loves the chaos and the destruction. De gustibus ain't what it used to be!
Posted by J.W. Williamson at 10/09/2017 09:20:00 AM
Email ThisBlogThis!Share to TwitterShare to FacebookShare to Pinterest
Labels: Bob Corker, Donald Trump