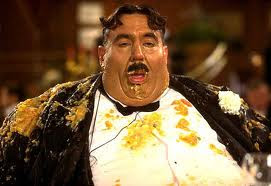 Who drew the new NC Congressional maps? Not, as it turns out, anybody in Raleigh.

The new Republican majority in Raleigh apparently farmed out the maps to a Republican political operative in Washington, D.C., one Tom Hofeller, who as recently as April 2010 was licking his chops over redistricting as a top staffer at the Republican National Committee.

USA Today has described Hofeller as a “key Republican general” in the fight to manipulate state politics through redistricting (via Cottonmouth). He's apparently now working for a "campaign mail outfit" in northern Virginia.

The man who drew our new maps works as a for-profit right-wing political operative.

How much was he paid?

After working in state legislative redistricting battles for three decades, he wrote "What I've Learned About Redistricting -- The Hard Way" in 2000 and laid out his political philosophy:

Okay. Got it!
Posted by J.W. Williamson at 7/21/2011 01:24:00 PM
Email ThisBlogThis!Share to TwitterShare to FacebookShare to Pinterest
Labels: redistricting, Tom Hofeller

Please don't post frame grab photos from Monty Python movies without giving credit where it is due, J.W.

I have also wondered about the use of other peoples copyrighted photographs on blogs. Is it permissible to just take someone elses photo and repost it?

It's not just this blog that does it. I think almost all of them do.

Maybe it's just not something enforceable?