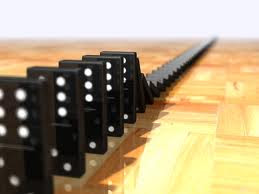 Since the Republican budget went into effect in NC on July 1, at least 1,012 people have lost their jobs, according to the NC Office of State Personnel (via Progressive Pulse).

These are actual jobs with actual people filling them. But since these now-unemployed folks worked for the people of North Carolina, Republicans apparently regard them only as convenient cannon fodder. Let them eat air!

To recap, this Republican job-killing budget was courageously vetoed by Gov. Perdue. Her veto was over-ridden only because five NC House Democrats -- the Five Goobers -- chose to vote with the Republicans.

The job-loss figure above is very conservative, as it does not count job losses in the state's 115 public school districts or its community college system. Many NC counties are already reporting job losses in schools in the multiple hundreds. The state's Department of Public Instruction is trying to compile cumulative job losses in public education, and those numbers should be available by the first week of the new school term.

Increased unemployment in a down economy -- that is the "Republican brand."
Posted by J.W. Williamson at 7/15/2011 01:04:00 PM
Email ThisBlogThis!Share to TwitterShare to FacebookShare to Pinterest
Labels: public education, Republican "brand", unemployment in North Carolina

What got us out of the Great Depression? The consensus is that it was Roosevelt's New Deal policies - government spending and job creation. Now right-wing talking heads with little education and even less common sense are trying to claim Roosevelt ruined everything.

The main problem with the recent stimulus is that it was too focused on tax breaks and not enough on job creation. I have yet to hear a coherent argument from the right explaining how laying off teachers and other public employees is helping the economy. I suspect that's because there is none.

Permit me to offer a couple quotes from Christina Romer about that "consensus" of yours. Can we agree that chairing Obama's Council of Economc Advisors and being a UC Berkeley Econ prof means: a) she's not a right-wing talking head and b) she has more than a little education?

In her 2003 entry in the Encyclopedia Britannica, she wrote:
The recovery from the Great Depression was spurred largely by the abandonment of the gold standard and the ensuing monetary expansion...Fiscal policy played a relatively small role in stimulating recovery in the United States."

In regular English: New Deal spending was NOT responsible for getting us out of the great depression, it was monetary policies (i.e. the 1930s version of "Quantitative Easing").

In a 2007 paper she explained:
...tax increases are highly contractionary. The effects are strongly significant, highly robust, and much larger than those obtained using broader measures of tax changes. The large effect stems in considerable part from a powerful negative effect of tax increases on investment.

In regular English: there is strong evidence that tax increases reduce economic growth, and this occurs because private employers react to tax increases by hiring fewer workers.

To sum up, the argument you're waiting for about laying off public employees is that raising (or maintaining) taxes to pay those public employees indirectly causes private employers to reduce their hiring by a greater number of jobs than the public jobs preserved.

I admit this isn't "from the right." But I thought you might be more inclined to listen to a left-wing full professor at a premier econ department--especially one who is known in the econ profession as a top historian on the Great Depression.

PS: if you have academic citations to demonstrate your "consensus"--and I mean serious work, not Krugman/DeLong newspaper editorials--I'd be glad to hear it.

I love Republicans. They are the first ones to want to shrink government, but they are always first in line to get whatever they can from government. And they are always the first to complain when the government which they have cash deprived fails to produce the results that only come with money. Of course, they tout themselves as great businessmen and women, but half the time it's sucking on the public teat that produced their wealth (government contracts, etc.) and the other half, they have filed repeated bankruptcies of their myriad of corporations and LLCs and have beat their creditors over and over again while protecting their own private wealth.

Absolutely - economics is not an exact science and as such a consensus should not be seen as 100% or even 80% agreement. I've also read that dropping the gold standard is considered an important contributing factor to the recovery from the GD (and I can't resist this... who has been calling recently for a return to the gold standard?)

You may have pegged me as a total left-winger but on many issues I'm not - on others I will proudly claim that moniker. On this matter, I simply think that the main thing holding us back from recovery is a lack of jobs so I do not see the wisdom in laying people off in the public sector. And New Deal jobs programs helped to reduce the unemployment rate by hiring around 3 million workers. I think govt. money is better spent creating jobs than paying unemployment.

Anyway, here is a quote from a recent peer-reviewed article on the subject(Hannsgen and Papadimitiou, 2010):

"Perhaps more important than the size of the fiscal stimulus was the number of jobs created by the Works Progress Administration and other federal agencies. An official study by John Kenneth Galbraith found that from 1934 to 1938, employment in federal public works programs equaled 13–15 percent of the total number of unemployed workers, with work relief construction employment amounting to an additional 18–21 percent of that number (1975 [1940], 109). These figures are far from comprehensive, as they do not include, for example, jobs outside of construction or the “multiplier” effects generated when federal workers spent their paychecks at private businesses. On the other hand, these numbers show that the persistence of mass unemployment throughout the 1930s should be blamed mostly on the enormity of the task at hand and Roosevelt’s reluctance to run deficits. (Some misleading employment statistics from the era, which leave out large numbers of public-sector workers, have led a number of scholars to understate the success of the governmental effort to reduce unemployment.)"

Finally, economists like Larry Summers and Paul Krugman may be suspect in your view but both are highly respected in the field. Krugman may write op-eds but he also has a Nobel Prize in economics. I don't think his analysis should be dicounted just because he is a public intellectual.

I also looked at the articles you posted links to. I found this quote from the 2007 paper interesting:

"Finally, we find suggestive evidence that tax increases to reduce an inherited budget deficit do not have the large output costs associated with other exogenous tax increases. This is consistent with the idea that deficit driven tax increases may have important expansionary effects through expectations and long-term interest rates, or through confidence."

"President Obama has made it clear that he favors extending the 2001 and 2003 tax cuts for middle-income families, but letting those for high-income earners expire as called for in current law. Recently, some have argued that extending the high-income cuts is necessary for the economy. This is simply wrong."

and later in the same article:

"If lawmakers are truly concerned about job creation, as they should be given the painfully high rate of unemployment, many approaches would be more cost effective than extending the Bush tax cuts for high-income earners. For example, a private sector study recently concluded that a third year of the Making Work Pay tax credit would be far more stimulative. Likewise, estimates by the Council of Economic Advisers suggest that spending $10 billion to prevent the layoffs of teachers, firefighters, and police would lead to nearly twice as many jobs as the estimated $30 billion of high-income tax cuts—that’s twice as many jobs for one-third the cost."

Right on, Teahadist. The concensus is that FDR's policies probably PROLONGED the depression rather than ended it. CCC etc sounded good on paper but in 20/20 hindsight, it might have been better left alone.

Accepting that Not Really is somewhat correct, the Teahadist said...

First off, thanks for the cogent and evidence-based reply! :)

Yes, I wondered if anyone would mention the "tax increase to reduce persistent deficit" line from Romer--and you're right, it does suggest that increasing taxes right now as part of the deficit plan would not have the bad consequences that people like DeMint or Paul warn of.

On the other hand, I think it's suspicious that before Romer joined the Stimulus-prone Obama administration she talked about crowding out (the net loss of jobs because private sector jobs dry up), and once she went on Obama's dime, she stopped--that's why the 2010 cite doesn't impress me much.

And that's the thing--the figures about government hiring under FDR (and in the 2009 stimulus) seem to be correct, but arguments based on them pretend the actual "right-wing" response doesn't exist. Rational right-wingers don't deny that teachers and whatnot are jobs, they say that NET of private sector responses, those policies reduce employment. That's the argument that Romer articulated in 2007, which you don't really respond to in your replies.

Also, just to give you food for thought, here's this from Larry Summers (since you brought him up) on the Charlie Rose show (http://www.charlierose.com/view/interview/11777).

Never forget, never forget, and I think it’s very important for Democrats especially to remember this, that if Hitler had not come along, Franklin Roosevelt would have left office in 1941 with an unemployment rate in excess of 15 percent and an economic recovery strategy that had basically failed.

I don't think he's saying FDR's jobs programs were useless, but I think he IS saying that job plan proponents need to be very careful not to exaggerate the benefits.