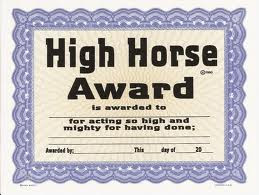 This morning's editorial by Steve Ford in the Raleigh News & Observer dings Republican hypocrisy in the matter of campaign finance. His opening:

"As Paul Stam, the illustrious Apexian who is majority leader in the state House, noted in a letter we published Friday, 'Campaigns cost money.' He could well have gone on to echo another Paul, who wrote in his first letter to Timothy (6:10): 'For the love of money is the root of all evil...'

"Stam was defending his Republican colleagues from our editorial criticism of a fundraiser conveniently timed to put potential contributors over a barrel and loosen up their checkbooks.

"Have Tar Heel Democrats done the same when they've had the chance? Absolutely, as the editorial said. But it was the Republicans who mounted atop their high horses and boasted about how putting them in charge would send a bracing breeze of propriety through the capital. Well, there's no law against the kind of soft-core shakedown they conducted. But let's not pretend it wasn't the same old money-grubbing that fueled GOP complaints about Democratic sleaze...."
Posted by J.W. Williamson at 7/03/2011 10:50:00 AM
Email ThisBlogThis!Share to TwitterShare to FacebookShare to Pinterest
Labels: North Carolina Republican Party, Paul Stam, Republican "brand"

RC Soles and John Edwards, what can we say.

Anonymous- You could say two wrongs don't make a right.