Clown College Has Chosen Its Voters 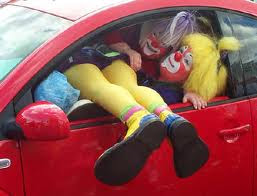 The new district maps for U.S. Congressional seats and for both the NC Senate and House got final passage last night. They are not subject under law to a veto by the governor.

Not only are counties split between districts; many precincts are split. The gerrymandering surpasses what any previous Machiavelli ever dreamed up. Laura Leslie points out a side cost to all this that has gone largely undiscussed:

"...The resulting lines divide hundreds of voting precincts across the state, running down sidestreets, across college campuses and through apartment complexes. Critics of the maps say the split districts will require local elections boards to print many more specialized ballots, which could cost hundreds of thousands of dollars and a lot of headaches for voters and elections officials in 2012...."

That will be an unfunded mandate, folks, falling on local boards of elections (a.k.a., county commissions) in those counties singled out for the slicing-and-dicing. Watauga was left intact.
Posted by J.W. Williamson at 7/28/2011 08:53:00 AM
Email ThisBlogThis!Share to TwitterShare to FacebookShare to Pinterest
Labels: Laura Leslie, redistricting, Watauga County

The republicans could not win with a clean up and down vote, so they use GD trickery to override the governor. More trickery on the way...

Governor can not veto redisricting maps. For the past 140 years, this process was okay now it is not.

The post is about the Republicans excusing a republican representative who was in the General Assembly before voting, but left so a 3/5 majority could be reached.

In other words, they screwed democracy and the will of the people.

That's what your praised Republicans who just sold the state to corporate interests while damaging education especially our preschool children, gutting our environmental regulations and invading a woman' privacy among other bad laws just did.