Mr. Jordan, At Home in the Womb 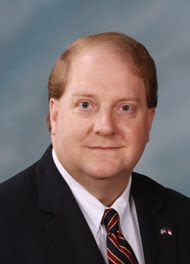 A new anti-abortion bill in the NC General Assembly (H215), co-sponsored by Rep. Jonathan Jordan, masquerades as a violence-against-women prohibition but is actually a backdoor move to declare every fetus "at any stage of development" an entity that Mr. Jordan and his Republican friends feel privileged by God to rule over.

Let's call the bill by what it really is: "Every Fetus Is Sacred But That Pregnant Slut Carrying It, Not So Much."

Mr. Jordan recently told both the Watauga and the Ashe County Republican conventions that his number one priority is still "jobs," when clearly his number one priority is messing around in women's private lives, stigmatizing gays, making it harder for certain classes of citizens to vote, and freeing up the Robber Barons from their last puny restraints.
Posted by J.W. Williamson at 3/24/2011 09:17:00 AM
Email ThisBlogThis!Share to TwitterShare to FacebookShare to Pinterest
Labels: abortion rights, Jonathan Jordan

You nailed this one. GOP: "We love women. We think every man ought to own one."

keep up the fight.

Make government small enough to fit into a vagina.