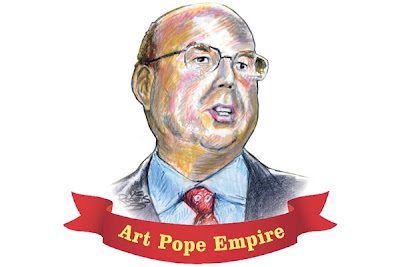 Finally! The North Carolina Independent and the Institute of Southern Studies have produced an exhaustive series of investigative pieces on kingpin Art Pope and his coils wrapped around the General Assembly in Raleigh.

I've managed to read only the one titled "The Art Pope empire: Media outlets, think tanks and election machines" by Chris Kromm. This is the piece that lays out the massive and relentless attack machine that smeared Sen. Steve Goss and Rep. Cullie Tarleton, though neither of them are mentioned in the article. But the exact same mail pieces that were used against Goss and Tarleton were used in dozens of other General Assembly races. This is the man pulling Dan Soucek's strings and Jonathan Jordan's guy-wires.

Other articles in the suite of investigative pieces focus on other areas of the Art Pope empire:

Pope-funded groups and the dismantling of public education (more Charter schools and school vouchers, anyone?)