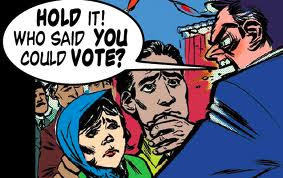 Gotta hand it to the NC GOP: they've managed to convince otherwise rational people that there's a massive incidence of voter fraud in North Carolina that only a photo ID law can cure. They've been riling their base about "vanloads of illegal immigrants" being driven to the polls to vote illegally, about "hundreds of dead people voting from the grave," and other tall tales meant to stampede people toward a big-government solution for a non-problem.

If they do get their way, and considering the large numbers of the Republican elderly who lack a driver's license, we do trust that they will eventually learn a lesson about "unintended consequences."

But to the point of all those hysterical claims about voter fraud, Mark Binker with the Greensboro News & Record does the most complete smack-down of Republican talking points that we've seen -- all very well researched and sourced.

1. Are the dead voting?
Some people do vote early under NC law and then pass away before election day, and those votes should not count but occasionally they do because no one noticed that the voter had died. The claim that dead people had been voting recently in Washington County turns out, after investigation, to have been a clerical error.

2. Have There Been Hundreds of Voting Felonies?
No. The claim comes from a (willful) misreading of a typo on a State Board of Elections report. What should have read "Voting Felons" (convicted criminals who are not under state law allowed to vote until their rights are restored) was typed "Voting Felonies," and the NC GOP had their motors racing on that one. The fact that those "voting felons" were actually caught and their votes were not counted gets no acknowledgement.

[Gary] Bartlett [director of the state Board of Elections] said this is a type of voting fraud that the state’s system is particularly good at ferreting out.

And election watchdog Bob Hall, of Democracy North Carolina, said there are some “honest mistakes” in that double vote number.

“People forget that they voted mail-in or during the early voting period,” Hall said.

That said, there are some cases of people trying to game the system.

Hall, who opposes the voter ID bill, points out that Voter ID will do nothing to curb such instances.

An ID would only be used to verify somebody is who they say they are, not whether they’re voting for a second or third time.

Mark Binker makes clear what was already clear enough: the Republican bill in the General Assembly is not about more honest elections. It's about shaving off Democratic votes in preparation for the reelection campaign of Barack Obama.

Off topic, but I'm sad to note the passing of Biker Bard. My condolences to his family and many friends.

Biker Bard - a man of infinite jest and discriminating thought. He shall be missed.

I have a county in mind in North Carolina for you(JW) on election day. If you believe there is no voter fraud, I challenge you to spend six weeks in that county before the election day. Work both sides of the ticket. If after that experience, you maintain no voter fraud, I will consider your points. You have to see it first hand. Are you game or just political BS? No write until you experience it.