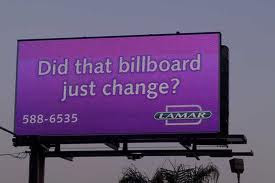 There are still a few environmentally friendly Republicans extant -- a very few -- and in Charlotte at least they're speaking up against allowing digital billboards every 1,500 feet. Mr. Brown's proposed law would also disable local governments from controlling signage on their highways or from regulating the cutting of trees.

Like Republicans who actually believe in evolution, these mildly "environmental" Republicans will likely be run out of the party by next Tuesday.
Posted by J.W. Williamson at 3/24/2011 09:39:00 AM
Email ThisBlogThis!Share to TwitterShare to FacebookShare to Pinterest
Labels: billboards, environmental issues, Harry Brown