We Hold This in Contempt 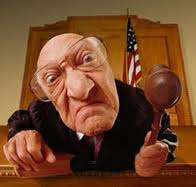 The News&Observer editorializes today about the new Republican majority's plans in the General Assembly to make judges partake of the poisoned well of partisan elections.

It hasn't been many years that judges in North Carolina began running without party affiliation. No more of that! sez the GOP leadership in the General Assembly.

They want judge candidates labeled "Republican" (and -- of yeah -- 'democrat') right there on the ballot so's they can know up-front whom Gawd wants on the bench.

...The real change in a return to outright partisanship would be a more heavily politicized judiciary, and possibly more "political" rulings from the bench.

Why? For one thing, judicial candidates would emerge from party primaries that often are dominated by the most zealous Democratic or Republican voters. Only true blue (or true red) hopefuls need apply, and the temptation for candidates to take popular positions on legal issues would increase - the last thing a judgeship candidate should be doing....

But to the guys pulling the Republican strings in the General Assembly, it's just another brick in the wall.
Posted by J.W. Williamson at 3/20/2011 10:35:00 AM
Email ThisBlogThis!Share to TwitterShare to FacebookShare to Pinterest
Labels: North Carolina judicial system, North Carolina Republican Party

This is unfortunate. Sadly, people have a tendency to reject polar behavior by forcibly swinging to the other pole. Activist judges on the left begin legislating from the bench by deciding cases based on ideology, not the law, and conservatives, failing at reducing this trend by simply complaining about it to the public, take to more forceful measures once in power.

A partisan Republican would say "you reap what you sow", or "who are you to complain?".

I will simply say that the whole cycle of shifting extremes is sad and unfortunate, and I invite you to join me in moderating it.

It's that, or this continuing game of Molotov cocktail handball. Your choice. You know where I stand.

On the other hand, most informed voters (I know, that's a minority) already know who is Repub and who is Dem. Candidates don't campaign in a partisan way, but it really isn't any secret.

JW ....How about a discussion on the process we use for selecting judges? Should these even BE elected offices?

Not that appointing judges solves all the problems either.....Just wonder what the pros and cons are.

I'm not sure of the details of the current NC non-partisan selection, but one interesting process is the "Missouri Plan," first adopted in 1940 by that state and later adopted, in some form, by many others. Check it out on Wikipedia.

"At the general election soonest after the completion of one year's service, the judge must stand in a 'retention election'."

If a judge is not retained, the process starts all over again. I saw this happen at least once.

One criticism of this plan is that the commission which selects the judicial candidates is top-heavy with lawyers.