Voter ID Bill Will Be Kangaroo-Courted This P.M. 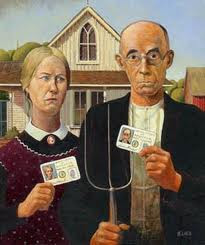 The text of the new Republican-sponsored voter photo ID law did not appear until last night, and it's to be subject to a public hearing this afternoon at 2 p.m. Then the elections committee is due to act on it by 6 p.m. Laura Leslie with WRAL asks:

That makes one question the point of two hours of public “input” on the proposal. If the ink on the bill is already dry and the votes on it are already counted, can the hearing be much more than political theater?

Some of the new Republicans in the General Assembly might be wanting to slow down the process a trifle and ask some questions, namely, "Does this bill actually hurt our own base more than the Democratic base?" Namely elderly people without driver's licenses.

Plus, if we can read the provisions correctly, a state college photo ID, even without a local address on it, should work for purposes of voting under Section 1.1 (a1) section 3: "A valid identification card issued by a branch, department, agency, or entity of this State, any other state, or the United States authorized by law to issue personal identification." Appalachian State University is "a branch, department, agency, or entity" of NC, and this provision doesn't say a word about that ID containing a local address that matches the local address in the official Voter File.

For those presently without any official photo ID, the bill would make each county's Board of Elections the official issuer of photo IDs, with the State Board of Elections providing each county board with "the necessary equipment, forms, supplies, and training for the production of the North Carolina voter identification cards and shall maintain such equipment." That appears at the moment to be an unfunded mandate.

(Under Section 1.9 (8), the bill sets aside a niggardly $600,000 state-wide for "education and publicity requirements." Yeah. That should cover it!)

There's this lovely provision under Section 1.8: "To obtain a special identification card without paying a fee, a homeless person must present a letter to the Division from the director of a facility that provides care or shelter to homeless persons verifying that the person is homeless."

Shouldn't Republican members of the General Assembly be required to present certification that they're all hopeless dickheads?

(One potentially positive rewriting of existing NC elections law: people requesting an absentee mail-in ballot will no longer have to write out their requests.)
Posted by J.W. Williamson at 3/15/2011 10:55:00 AM
Email ThisBlogThis!Share to TwitterShare to FacebookShare to Pinterest
Labels: Laura Leslie, North Carolina Republican Party, voter suppression, voting rights

Don't worry about having an ID to vote, just take you concealed weapon from the bar after a few drinks and walk over to the election office and demand your right to vote with your six-shooter.

Anonymous, your post is ridiculous. You hurt your own cause.

Just wow -- really whats next? but anon that was just funny