Our Esteemed 'Honorables' in Raleigh 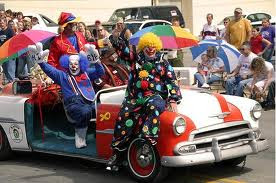 As Chris Fitzsimon says, the GOP Clown Car in the General Assembly is moving so much bad legislation so fast, with the Capitol press corps greatly reduced in numbers and understandably exhausted, that it's difficult for an ordinary citizen to keep up.

For example, not content to impose additional hurdles on voters, many of whom have been registered and active voters for years, in a voter suppression ID law, the Clown College has also introduced a bill to eliminate straight-party voting. Why? Must be that more Democrats vote straight-party.

Other evidence: Desperate to please their Tea Party ring masters and frustrated in their attempts to override The Guv's veto of House Bill 2, the "Screw Obamacare" act that the Attorney General says is unenforceable and unconstitutional to boot, the House Republicans used a parliamentary trick. Rep. Paul Stam, the Republican majority leader, switched his vote on the veto override yesterday so that under the rules he could bring up the override again for a revote ... should there be an opportunity when four Democrats were simultaneously out of the room for a pee. Rob Schofield has the full description of what went down.

Unleash digital billboards every 1,500 feet on our highways. Cripple the public schools. Try to engrave second-class citizenship for gay people in the state's Constitution. These are only the visible peaks of outrageousness.

There's House Bill 301, which would empower North Carolina to create its own currency when the "inevitable destruction of the Federal Reserve System" comes, presumably about 30 minutes after The Rapture.

Or House Bill 34, another "Tenther" law being pushed by the Art Pope Empire that would assert North Carolina sovereignty over the federal government. Jonathan Jordan is a co-sponsor of this one.

...you may not have heard that the House approved legislation Wednesday that would hamstring efforts to protect rivers and streams from pollution, prevent state officials from adopting workplace safety laws, even make it impossible for the Department of Revenue to adopt rules to crack down on corporations that try to avoid paying their taxes.

Maybe you didn’t know that a House committee voted to change current law to allow people to carry concealed weapons in state and local parks and in restaurants that serve alcohol.

You probably didn’t hear that early Wednesday morning lawmakers considered a list of options to balance the budget that included laying off 18,000 teacher assistants and abolishing a nationally recognized early childhood program for at-risk kids.

Or that legislation is making its way through the General Assembly that could deny access to low interest federal loans to 177,000 community college students, many of whom are unemployed workers trying to learn another skill after losing their job.

WHERE ARE THE JOBS?

What a bunch of idiotic, uncaring, self-centered fools! And that includes you, too, Jordan. But we knew you didn't have too much up there to begin with. I hope we can say "bye, bye" next year.