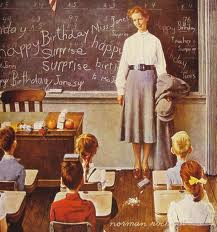 It was your basic Friday bad news dump, with the new Republican majority in the General Assembly announcing that they intend to eliminate between 5 and 10 percent of teaching positions and increase class sizes, on their way to cutting $1 billion from education alone.

They say their target is "dead wood," bad teachers, and apparently there are thousands of them to hunt down and string up.

Their real target is public education itself.

Meanwhile, the Watauga County Board of Education, with a majority of Republicans, voted unanimously (4-0, with Lee Warren absent) again to oppose Senate Bill 8, which is another assault on public education in that it mandates public schools share more and more funding with charters. Sen. Dan Soucek of Watauga voted for it.
Posted by J.W. Williamson at 3/05/2011 09:49:00 AM
Email ThisBlogThis!Share to TwitterShare to FacebookShare to Pinterest
Labels: Dan Soucek, Jerry Tillman, public education

Why the opposition to charter schools? And why would the school board oppose funding of those schools? For every child educated in one of the charter schools, the remaining public schools are saving the cost of having to educate that child.

It seems to me this is more about protecting jobs than it is about educating children.

So I guess Soucek came away from trying to dictate what people do in the privacy of their own bedrooms just long enough to screw our teachers in the open. Color me "not surprised."

The teachers at Two Rivers (and other charters) are our teachers too, just like teachers at other public schools in the county that your kids don't go to. What will it take to beat the fact into your and JW's libtard skulls that charter schools are public education--funded and regulated by the state, just like WCS.

So I guess Soucek came away from trying to dictate what people do in the privacy of their own bedrooms just long enough to screw a lot of teachers in the open. Color me "not surprised."

The problem is NOT Two Rivers, which is our local Chartered school and serves a good purpose. The problem is if a county has several private schools convert to "Charter" status, or several new Charter schools are started up in a school district, without the same curriculum requirements as the regular public schools, and the public schools have to divvy up an ever-smaller pool of funds to pay for them.

One Charter school in a school district is not a problem, and is often a blessing (like Two Rivers). FIVE charter schools (or more!) IS a problem.

Five charter schools would be a problem only to the reputation of the public schools that will not preform as well. People might start wondering why.

I don't understand the "love" for charter schools. From everything I've read, there is absolutly NO evidence that students in charter schools perform better than those in traditional public schools. Who gets to decide how many charter schools can be in a school system? The school board? How many charter schools would be enough in Watauga? 5? 10?? Who pays for the facilities? It seems like we'd be spreading the already small pot of money over an ever-widening area. Most conservatives advocate for FEWER government programs, not more. Or, should I be so cynical to suggest that this really isn't about improving the schools at all - it's about completely destroying the public school system.

end tenure,
I think you mean PERFORM instead of preform....Quite the advocate for charters. I'm sure they appreciate it!