I'm Not Making This Up 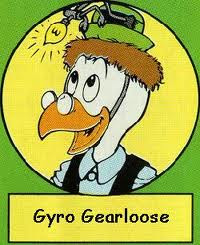 If I'm reading this correctly, County Commissioner Nathan Miller and fellow Commissioner Vince Gable, who just two weeks ago voted for a resolution calling for a public referendum to raise the local sales tax rate, are now saying that they themselves will vote against the referendum. What?!

This is according to NewGuy over at the Republican Party blog:

"...Miller and Gable BOTH stated that they personally would not vote for a sales tax increase IF such a referendum were held - but, that given the possibility of heavy cuts from the states, some additional revenue sources might need to be considered, they decided to make arrangements for public input...."

"IF such a referendum were held"??? The two of them voted to hold the referendum, as did Commissioner David Blust (whom no one bothers to interview since he's just a bobblehead exactly mimicking the nearest adults).

We guess the blow-back from the Tea Party got a little brisk.
Posted by J.W. Williamson at 3/13/2011 12:08:00 PM
Email ThisBlogThis!Share to TwitterShare to FacebookShare to Pinterest
Labels: Nathan Miller, Vince Gable, Watauga County Commission

What you are witnessing is two people without principle or conviction. We are voting for it before we vote against it. It was true of John Kerry when the accusation was made, and it is certainly true of these two we-don't-stand-for-anything loser commissioners. As for the Tea Party, I'm not seeing any blowback. In fact, looks to me like the Tea Party/Republican Party is right on board with this thing now that it has an "R" behind it. What a bunch of hypocrits.

JW, you are flatout wrong. I know David Blust well, and I have NEVER seen him mimic an adult.

you are liberal hypocrites said...

This one is a contingency means of paying down the debt if it is absolutely necessary. The previous one was a means to increase the debt.

ref your "I'm not making this up"

Or, at least you are misstating (perhaps intentionally? what I said.

You are certainly welcome to your spin, but please - don't change my clear wording.

But really. Tell us all again how this one is different from the other one. We LOVE to read rationalization!

New Guy,
Dude, when I go to your original post and read this: "Miller and Gable BOTH stated that they personally would not vote for a sales tax increase IF such a referendum were held," I get the same message that JW got.

Any way you cut it, these guys are waffling all over the place.

Opinionated, do you mean the $30,000.00 the previous commission spent on an elect ion when the general election was only two months away, or the proposed $30,000.00 this commission may spend in order to meet a deadline that would cost the county $700,000.00 if we waited and decided to ask for the sales tax?

Also to "you are liberal hypocrites":

The only way this is different is that now that the rushed through referendum has an "R" behind it, it's all a-okay with you.

Now who is the real hypocrite? Look in the mirror.

As for this: "This one is a contingency means of paying down the debt if it is absolutely necessary.

Are you saying it may not be necessary? Then why are we doing it? Wouldn't it make more sense to find out if it's necessary and then vote for it? Don't you realize that's just a way for these commissioners to try to have it both ways: we don't support it but we'll vote for it.

Really. It seems like they could come up with a better bit of bullshit than that. They should just plant their feet somewhere instead of continuing to move the line in the sand behind themselves.

What did you mean, nice try.

These commissioners are now all over the place. We were against it last year because it would hurt working people; and we're against it this year too; but we support spending $30,000 on a referendum to support something we don't and promise to vote against it personally.

Yeah. Got it. These guys are the keystone cops.

Well, I'll tell you what. I voted for the referendum for the rec center because we would have something to show for it. I'm sure as hell voting against this piece of crap especially when the commissioners themselves say they don't even really know if we need it or now.

Elections have consequences. Look what we got.

Well, this all should prove to be very interesting indeed.

I did some volunteer work for the Democrats last year. They didn't take a stand as a Party on the referendum because Democrats were split on the issue. In other words, they didn't just fall in line because their Democratic elected officials were pushing for the referendum.

I'm betting on the latter, and I've got $5 that says you'll see a letter or a column to that effect in the very near future.

Anyone want to take me up on that bet?

Republicans can't manage money. They have proved it over and over again. Giving them money is the worse possible thing we could all do. That's why I'm voting against the referendum. I voted against the first one too. Besides, if they thought there was going to be a need to raise taxes, they should have said so when they were running. To argue they didn't know it until a couple of months after they were in office just brings up the question of why they didn't.

Apparently the concept of "contingency planning" is unfamiliar to some of you.

I'm not sure if I am in the "tea party" but I am sure that I support most of what I hear them saying. Especially cutting expenses - not raising taxes.

My guess is that we won't ever get to actually holding a referendum. If the state budget makes it possible for the county to absorb the 'hits' without raising taxes, my bet is that's what you will see happen.

I'm not sure how they couldn't know since the financial situation is public record. Maybe they just didn't bother to research. I'm taking the bet that only a handful of "conservatives" hold to their principles and oppose this. I could've sworn that it would've taken longer than this for the Republican commissioners to piss down their legs. Guess not...sit back and watch the show, Watauga County. Things are about to get very interesting!

Well, that's a pretty easy thing to say. I mean, who doesn't. The commissioners are a joke.

You have to understand that new guy was talking to the people on the conservative board.

I am sure that if he was expecting henery and some of the others here to understand what he was saying, he would have used smaller words.

As for the size of new guy's words, I really couldn't care less. It's not how big it is. It's what you can do with it.

I'm talking about the $30,000 it costs to hold a separate referendum WHENEVER it's held.

There was the argument last time that the referendum had to be held at that particular time to beat some sort of deadline for getting a grant, or getting a savings on loan interest, or some such (can't remember what the argument was). The argument this time is if we don't pass it a.s.a.p., we can't collect the tax until MUCH (read: 3 months).

Didn't buy it last time. Not buyin' it this time.

Opinionated, there's even more to it. When the Republicans fought the sales tax the first time, they said it would unfairly hurt working people, and their own guy at the press conference said a property tax was fairer. Did that change?

They said they opposed the recreation tax because there was no requirement that the money actually be spent on recreation. What has changed?

They say they are doing this just in case, and as a Tea Party person wrote in today's paper, wouldn't it be smarter to show us what they would have to cut, etc BEFORE immediately doing a tax?

Of course the county says it only wants this "just in case." Yeah. And I've got a bridge to nowhere to sell ya.

Well so much for paying down the debt. According to the public hearing tonight the money will go to fund education. Does this group of 3 clowns have any clue? They couldn't find their way out of a paper bag.

Camelot, there is not going to be a referendum. You are the clueless one.

At least the Republicans will give the people the right to vote. Quite a bit more than we got from the "Dealites" on the $112M new school. A debacle that put us in this debt crisis.