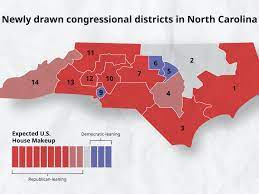 Here's my understanding of the law: In 2019 a three-judge panel issued a stinging 357-page rebuke to the NC General Assembly's redistricting of NC House and Senate districts (Common Cause v. Lewis). The three judges ruled those maps unconstitutional and forced others to be drawn that were subsequently used for the 2020 General Elections. The legal logic used to rule partisan redistricting (gerrymandering) illegal in 2019 has never been tested by a higher court. But in the next couple of months, it will be.

Before a different three-judge panel starting tomorrow, the constitutional legitimacy of the Republican majority's newest map versions of all three legislative jurisdictions -- US Congress, NC House and Senate -- will be put to trial. Three separate lawsuits have been combined (even though they have different specific complaints and requests):

▪ NC NAACP v. Berger: Doesn’t challenge the maps themselves but rather the rules that undergird them. Republicans claimed, when drawing the new maps last fall, that there isn’t evidence of racial polarization, and so they wouldn't be using racial data when drawing the maps, a decision this lawsuit argues was meant to eliminate Black officials.

▪ Harper v. Hall: This is the continuation of the successful 2019 lawsuit discussed above (a decision which has never been appealed). Using mostly the same lawyers and legal arguments, it seeks to prove that even though Republicans drew less skewed maps for the 2020 elections because of that 2019 lawsuit, lawmakers then went back to drawing unconstitutional maps again last fall once the new census data came out.

▪ NC League of Conservation Voters v. Hall: This is possibly the most ambitious of the lawsuits, since it seeks to not only have the GOP-drawn maps thrown out but also proposes its own maps to replace them.

(Thanks to Will Doran for keeping me straight. I'm paraphrasing and quoting liberally from him)

The three judges starting tomorrow have been ordered to conclude their expedited trial on all those issues by Wednesday (of this week!) with closing arguments scheduled for Thursday. The judges are mandated to have a final ruling by January 11th (a week, Tuesday). Then any appeal (which will go directly in this case to the NC Supremes) will have only two business days (holy cow!) to get itself filed with the high court. Two high-pressure days to research more law and write arguments.

Whatever the newest trio of Superior Court judges decide, the NC Supreme Court will get the appeal immediately, and promises to deal finally (?) with the whole thorny issue of partisan gerrymandering as the legitimate power of an arm of state government.

Unfortunately, I have my doubts about the balance and fairness of the current State Supreme Court.