When Is 'Desperation' a Defense for Stealing?

Short answer: When you're a white Republican male: 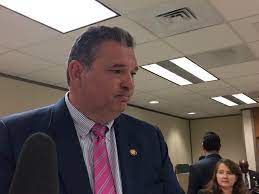 CHARLOTTE, N.C. (AP) — A former North Carolina state lawmaker was sentenced Tuesday to probation and ordered to pay a fine for an unlawful scheme to siphon campaign dollars to his family farm.

David Lewis, the former chairman of the powerful House Rules Committee and author of Republican redistricting plans during the 2010s, had pleaded guilty to two counts nearly a year ago. He resigned from the General Assembly the same day the accusations and the plea agreement became public.

U.S. District Judge Max Cogburn sentenced Lewis to two years of supervised release, which is similar to probation, and a $1,000 fine, according to information provided by the U.S. attorney's office in Charlotte.

Federal prosecutors recommended in May that he receive no prison time. Lewis' attorneys had made a similar request, writing at the time that his wrongdoing was “an act of desperation rather than greed.”

Posted by J.W. Williamson at 8/18/2021 07:40:00 AM
Email ThisBlogThis!Share to TwitterShare to FacebookShare to Pinterest
Labels: David Lewis