How They Run: Pat McCrory, Chameleon

Here are some recent campaign themes from Pat McCrory's social media (Facebook and Twitter, mirror images of one another): 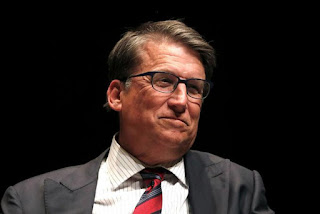 Still needing the Trumpists --Trump publicly pissed in his face -- the ex-governor knows the odds against him in the primary if the conservatives coalesce, so he puts out paint-by-numbers conservative boilerplate, like stringing together "Joe Biden, Kamala Harris, and George Soros" in the same sentence, alleging they're the trio spending "MILLIONS" to propagate the "radical liberal agenda." (What? No "Socialism"?) Your standard wall-papering over the "moderate" Republican candidate's lack of passion for the culture wars.

Fighting to stay relevant after the Trump diss, McCrory has challenged his two Republican rivals to three debates before the primary. Mark Walker immediately agreed, but Ted Budd, the Trump honoree, hasn't, and McCrory is obliged to spread that news.

Most interesting (cause Pat McCrory ain't at heart no mean man), he tries going "full Ron DeSantis," scapegoating immigrants on the Southern border as the real causes of disease. McCrory shared a Fox News posting: "WH dodges question on why vaccinated Americans must wear masks while infected migrants [are] released into Texas town." That's inflammatory, guaranteed to raise the race temperature of Trumpists, where it's always burned hot.

In fact, the Southern border constitutes a "National Security Crisis." McCrory currently harps most on that meme: "President Biden and Vice President Harris, get to the border - we can't keep ignoring this National Security Crisis!" he said in a video posted yesterday. In a separate post he returned to the theme, naming the main three Democratic candidates as sharing in blame: "There is a crisis on our Southern Border - and Joe Biden and Kamala Harris refuse to admit it. Why won't Erica Smith, Jeff Jackson, or Cheri Beasley speak out about this National Security Disaster?!"

What is the disaster, exactly? Could it be no more complicated than brown people weaponized as a threat to white supremacy and a distraction to the real facts of the case, that it's anti-VAX and anti-mask Americans who are spreading disease willy-nilly across the landscape?

Also recently, McCrory tested "Joe Biden's inflation" as a thing, a hobby-horse he might ride like other Republican candidates -- the high price of gas as a sign of Biden's failed administration. It's bogus, and anyway, it's a weak punch that lands like overcooked pasta. McCrory nevertheless has learned to throw in the Democrats to share in the blame: "Why won't Jeff Jackson, Erica Smith, or Cheri Beasley speak out on this?!"

Bless his heart, McCrory's trying! But the impression remains that he doesn't have actual passions for policy positions. He has a passion for pleasing, especially the country-club one percent.