It's August! Trump Is Supposed To Return in Glory 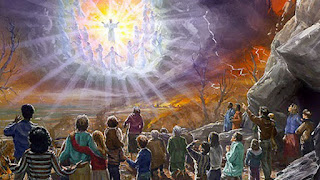 Mike Lindell, the foam pillow guy, boldly proclaimed August 13th as the date for The Return. Trump himself, uncharacteristically cautious, said it would be sometime in August. But Rep. Marjorie Taylor Greene, who never heard a conspiracy theory she didn't immediately parrot, left the reservation: "It's going to be very difficult to overturn the 2020 election, and so I'd hate for anyone to get their hopes up thinking that President Trump is going to be back in the White House in August. Because that's not true."

To be clear, the addled true believers have offered several movable dates when the Great Switcheroo was supposed to happen ... January 20th, March 4th. Some claimed that Jan. 20 would be the day of “Great Awakening” or “The Storm” when Trump would expose the supposed cabal of Satan-worshipping pedophile cannibal elites and declare martial law, meaning he would remain in power, and leading to mass arrests and executions of top Democrats or other supposed members of the cabal. Seriously. Michael Flynn went further. He said a Myanmar-style military coup could fix everything.

Predicting the end of the world by a date certain always proved mockable -- though many have tried it. Predicting the return of Trump also invites mockery, but it's the Michael Flynns of this screwed up country who cause my agita. They have lots of guns and itch like prickly heat to use them.

He also didn't specify who the "Cabinet members" were. The old cabinet, out of office since January 20th? Many in that cabinet have by now distanced themselves from the insurrection/coup attempt. Or does Meadow mean a brand new kitchen cabinet, a shadow affair, primed and ready to take over government on August 13th?

Posted by J.W. Williamson at 8/01/2021 08:58:00 AM
Email ThisBlogThis!Share to TwitterShare to FacebookShare to Pinterest
Labels: Donald Trump, Trumpism

It's more like a closet than a cabinet.
Every Nazi bunker, according to code, requires a closet.