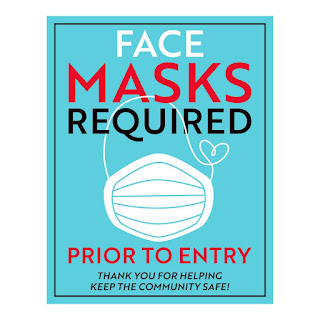 Benjamin Ray, who's running for Boone Town Council as a Republican, came out on Facebook with a post that said among other things, "Our current council (once again) wants to go backwards and enforce stricter Covid mandates/rules than our own governor has for the state (rules that will likely hurt our recovering local businesses)." The Town Council had announced an upcoming special session on the masking issue, and Ray knew it was coming. Two other town council candidates, Eric Woolridge and Adrian Tait, both registered as "Unaffiliated," signed on to Ray's strange campaign letter.

On August 6th, three days after Ray's Facebook post, the Boone Town Council did reimpose a masking mandate for indoor businesses. Jennifer Greene of the Appalachian Health department supported the move -- she had opposed the first masking mandate last year -- and so did the leader of the local Boone Area Chamber of Commerce:

"Before the members discussed the mask mandate, AppHealthCare Health Director Jennifer Greene provided a COVID-19 update and answered questions from council members. She said that the county is starting to see the level of cases similar to what the county experienced in the spring and that the cases picked up at the end of July."

Boone Area Chamber of Commerce CEO and President David Jackson also spoke on the potential impact on businesses. He said that some businesses — The Cardinal, Lily’s Snackbar and Speakeasy Tattoo Co. — are already mandating masks for customers and employees.

“I have been encouraged to hear more employers around here, providing good information about vaccines to their employees,” Jackson said.

He also heard from businesses that said it’s not tenable for staff to enforce mask wearing by patrons who refuse to do so, but it would be easier if they had town orders to back them up.

“Our message since the end of the (state executive order) has been to keep a mask in your pocket and know that if a business requires it, you must comply or face not being able to visit that business,” Jackson said.

I don't think that anti-masking agitation is going to fly in Boone.

Benjamin Ray, Eric Woolridge, and Adrian Tait get some pushback from Todd Carter, another Boone Town Council candidate who very much supports the masking rule: https://www.facebook.com/groups/261911858236540/posts/510070076754049/

The Facebook group "Pro-Mask Businesses of the High County" has over 3,000 members.