How They Run: Mark Walker, Odd Man Out 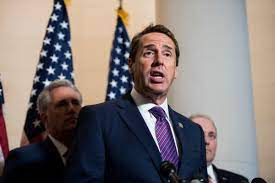 His Twitter bio: "Conservative Champion. Bridge Builder. Running for US Senate. Fmr. Pastor and Member of Congress serving all people of North Carolina." We might add, "Thought he had the conservative, especially Christian conservative base sewn up. Then Trump anoints Ted Budd."

So there's maybe a little desperation in the Walker camp? A new video spot, painfully staged, has Walker striding up to the abandoned F. W. Woolworth's in Greensboro, where the famous "Greensboro Sit-in" happened, where he coaxes Clarence Henderson (who was not in the first wave at the sit-in but in the 2nd wave and who nevertheless is now an elderly gentleman) to endorse him on camera. It's actually painful to watch Henderson struggle with his lines, none of which come off as remotely authentic to the man, but, you know, "Bridge Builder" (see above) ... get it? Video also features super-Christian and former guv of Arkansas, Mike Huckaby. The message: "Mark Walker, Christian champion ... He Ain't Scary." Last I looked, this video was pinned to the top of Walker's Twitter feed

(I wonder if Walker's main attack on Ted Budd will be the implication that he is scary and whatever the opposite of bridge-building benevolent white guy praising a significant moment from the past in the Black struggle for equality. Budd's a gun-toting Trump clone wannabe, while Walker positions himself as the softer, more religiously pious alternative. Hmmm. That can't possibly work in the Trump era, can it?

Another recent Walker as talking-head video contained the weirdest attack on Thom Tillis as a way to attack Ted Budd. What? And by the way, Walker opposes the so-called "bipartisan" infrastructure bill because it's what's for breakfast if you're a Republican conservative.

Walker, like Ted Budd incidentally and clearly veering off the "Bridge Builder" image, bashes Rep. Cori Bush, the woman-of-color-as-conservative-punching-bag-of-the-week. Wonder how Clarence Henderson (see above) might feel about that wedge.

Yes, and there's the persistent paranoia that liberal Socialist dictators in this country will use the government to hype the bogus threat of COVID in order to scare the people into giving up their "freedoms."

He posts a FoxNews.com article on why China should be sanctioned and stripped of hosting the 2022 Winter Olympics, because of "human rights violations, religious persecutions, & the deadliest systematic cover-up in history" (he means the Wuhan laboratory-grown virus that escaped and caused a Pandemic -- just one of the Trump-inspired conspiracy theories growing like weeds).

Walker seemed shunted aside after Trump tromped into NC to endorse Budd, but he looks to be hanging in there in the money chase. As a draw for religious conservatives, he could actually give McCrory the advantage, as he and Budd could divide the hard-right while McCrory grabs the more moderate middle and squeaks out a win.