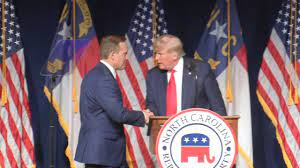 Let's get one thing straight immediately: Ted Budd takes a dim view of any new masking mandates. On July 30, he posted this: "The Biden administration brought back mask mandates without showing the American people compelling data. DC liberals have politicized our institutions and broken our trust." Maybe DC liberals are screwing up the whole wide world and all the adjoining planets, but continuing to politicize the practical benefits of masking tells me a ton about Budd's intelligence and/or the way he manipulates the intelligence of his low-information constituents.

And of course, like Ron DeSantis and even poor Pat McCrory, he wants to tie vaccinations and mask mandates to a supposed crisis on the Southern border: "Nancy Pelosi is more interested in forcing fully vaccinated staff & visitors to wear masks than stopping COVID-positive illegal aliens from flooding across the border. Absurd." If you're a conservative Republican, you pass up no chance to stir up racial resentment.

Unlike Pat McCrory's Facebook and Twitter, which are identical in content, Budd's Facebook news feed is different from his Twitter feed. On Facebook, he harps much more on illegal immigration, for one thing, and passes up no opportunity to bash President Biden, but he also shows himself visiting with businesses and constituents in his congressional district. Blessedly, there are few reminders of Donald Trump. Perhaps at one point Budd had the Trump endorsement pinned to the top of his Facebook feed, but it's not there now.

I don't really grok the conservative affection for cryptocurrency, but Budd shares an interview he did with Breitbart News in which he signals his opposition to the infrastructure bill because it proposes a tax on cryptocurrency.

I'll say this: Budd's social media is more entertaining than Pat McCrory's because Budd is an authentic conservative and energetic in promoting those causes, while McCrory is an inauthentic copy of a conservative. Budd posts on all sorts of topics -- abortion to "critical race theory" to Biden's budget, especially singling out unemployment benefits that low-wage employers are blaming for the current labor shortage in the fast food industry. The overall impression is that Budd has plenty of energy to engage, while Pat McCrory is mainly hiding out.

And thus far, Budd is not trying to smear or characterize his three main Democratic rivals.