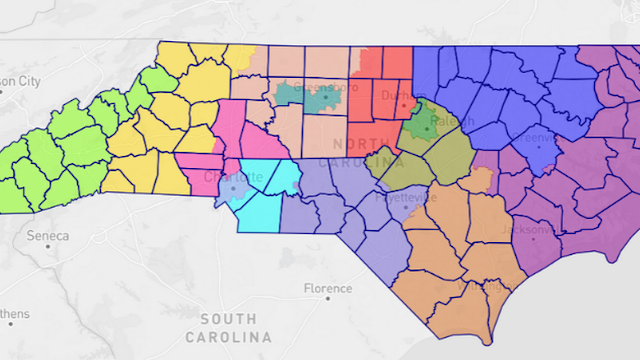 It won because his rendering (above) of a new 14-district North Carolina would preserve "communities of interest" -- groups of people in one area who have common political, social, or economic interests. "North Carolina’s redistricting standards discourage splitting those communities between districts." But splitting people up for political advantage is exactly what gerrymandering is, and the NCGOP hired experts to split plenty after the 2010 Census, and they will be expert at it again, soon. It won't matter that those post-2010 districts got thrown the hell out by multiple courts.

Watauga County in the make-believe above (top lime-green block on the left) would be moved into the 11th CD. Yikes (but a good "yikes") -- Madison Cawthorn! So pleased to make your acquaintance! Goodbye, Virginia!

Given a cool late Summer evening, outside with an iced beverege, you could get drunk on that whole scenario. Watauga and Buncombe, together at last!

Here's the heart of Fischer's computering: He estimates that his map would likely favor Democrats in five districts and Republicans in seven, with two as true swing districts. [Would love to learn more! Call your agent, Nate.] Even on a fair map, he said, Democrats are at a disadvantage because they tend to be concentrated in urban areas. “Their population distribution is inefficient,” he said.

(Making Democrats "efficient" will be a tall order! But I'd pay admission for Nate's extended explanation of "population distribution is inefficient.")

It's too bad that a fair map that won an award for its logic will be wholly ignored by Berger/Miller and their lieutenants. 'Cause they're about to dance all over fairness with their own new ideas for how to best use 14 new districts.