The 11th CD Congressman Madison Cawthorn's lives solely to arouse his Trumpist donor-base, and he did a sufficient job of that last Sunday in Macon County, where he told the GOP faithful a number of things that have made him, once again, political buffoon of the week:

He claimed that elections in the United States are “rigged” and said there will be “bloodshed” if the country’s electoral system continues on its current path.

He suggested that he was prepared to take up arms against his fellow Americans if necessary to combat voter fraud.

He repeated his call for President Biden’s Cabinet to invoke the 25th Amendment and remove Biden from office and said that Vice President Harris should be removed, as well.

He told the crowd, “I will remove Joe Biden from office, and then, when Kamala Harris inevitably screws up, we will take them down, one at a time.”

Cawthorn also used the terms “political prisoners” and “political hostages” to describe those who were arrested in the Jan. 6 attack on the Capitol.

He apparently raises heaps of money with this kind of talk, which is what he cares about, but he also drew the rebuke of Republican power-operative Brent Woodcox, who tweeted last night:

It’s time for more Republicans to start speaking out against this unrepentant moron. It’s one thing to peddle conspiracy theories on Facebook to try to raise money from the gullible. This is dangerous incitement of a potential civil war. This BS will get people killed.

Aside from the fact that Woodcox is correct -- it is dangerous talk by an adolescent-brained sexual predator who's taking himself waaay too seriously -- Woodcox's criticism comes with some serious throw-weight, representing the most powerful Republican in the state, namely Senate President Pro-Tem Phil Berger, for whom Woodcox has worked and with whom he has collaborated on such projects as the redder redistricting of the state. Currently, Woodcox is Senior Policy Counselor at the NC General Assembly. 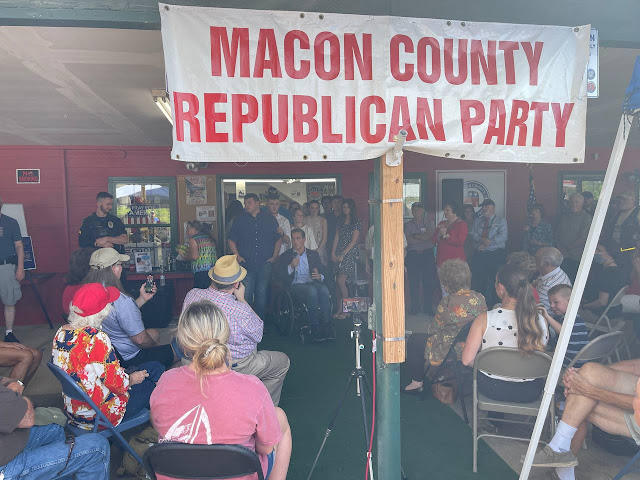