The Newest Domestic Terrorist Is From Cleveland County 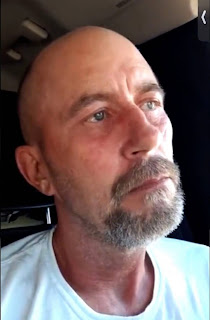 Floyd Ray Roseberry of Grover, NC, in Cleveland County, not far from Shelby, drove his big black pickup onto the sidewalk in front of the Library of Congress yesterday morning, announced to a Capitol policeman that he had a bomb in the truck, and caused a complete shutdown of Capitol Hill and the evacuation of many government buildings including House office buildings. The standoff lasted for almost five hours before Roseberry surrendered. There was no bomb.

He professed himself the enemy of Joe Biden, the friend of Donald Trump, said the revolution is here now, and told police that there were other bombers also in the vicinity.

In a Facebook livestream aimed at President Biden, Roseberry said, ”I’m all ready to die for the cause. And brother, if you could do anything to save one life, one life, you said you’d do it. Well, you got a chance. I want to go home. I want to go home and see my wife."
He left home and wife on Wednesday, saying he was going fishing.

“We’re living in a free country, Joe. The choice is yours. If you want to shoot me and take the chance of blowing up two-and-a-half city blocks, 'cause that tool box is full, ammonium nitrate is full.

What people of Afghanistan he was referring to is unclear, since the ones we're seeing these days are very much trying to leave their home.
Rep. Mo Brooks, who is already being sued for inciting the insurrectionists on January 6th, couldn't conceal his glee that more domestic terrorism was playing out at his workplace. From Alabama, Brooks issued a statement which said in part, “Although this terrorist’s motivation is not yet publicly known, and generally speaking, I understand citizenry anger directed at dictatorial Socialism and its threat to liberty, freedom and the very fabric of American society. The way to stop Socialism’s march is for patriotic Americans to fight back in the 2022 and 2024 elections. I strongly encourage patriotic Americans to do exactly that more so than ever before.”
Posted by J.W. Williamson at 8/20/2021 07:29:00 AM
Email ThisBlogThis!Share to TwitterShare to FacebookShare to Pinterest
Labels: Floyd Ray Rosenberry, Mo Brooks, Trumpism